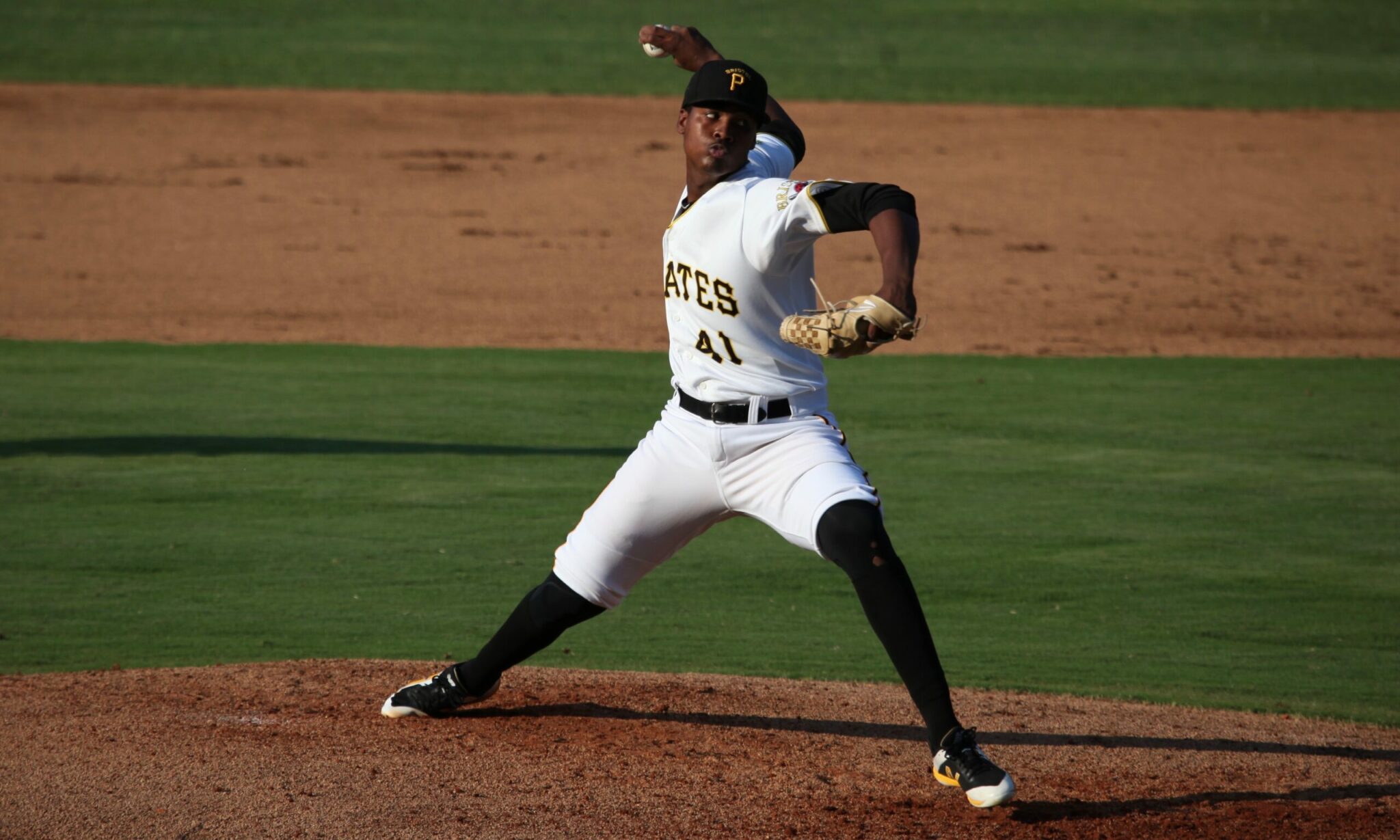 Back on May 10th, Mike Burrows was named as our Pirates Prospects Player of the Week. He was the first pitcher to gain those honors (it was only week three of the season). Until this week, he was the only pitcher to win our weekly award. Luis Ortiz made two starts this past week. On Wednesday, he threw six shutout innings on eight strikeouts. On Sunday, he allowed one run over four innings and struck out five more batters. In those ten innings, he gave up five hits and three walks. Those two performances combined earned him Player of the Week honors for August 8-14.

The Pirates have made it difficult for pitchers to earn this recognition. Very few pitchers are making two starts in the same week, and if they do, they are usually limited in pitches during the second start. Part of that comes from every week having a day off, which didn’t always happen in the past. It also feels like the team is being more cautious with the work of pitchers.

Ortiz has been having an up and down season. He mixes good starts with poor starts. He isn’t really giving up a ton of runs. He has allowed more than four runs in a game twice, giving up five once and six once. His issue has been high pitch counts that lead to shorter outings, so even when he gives up 2-3 runs, it hasn’t been a good game. Overall he has a 4.79 ERA in 103.1 innings, with a 1.17 WHIP and a .232 BAA. Ortiz has recorded 108 strikeouts this year, which ranks sixth in the league and has him threatening for the team record held by Ian Snell, when he had 142 strikeouts in 2004, the year that he made his big league debut. It’s extremely unlikely that Ortiz makes his MLB debut this year, but that high ERA isn’t a great indicator of his talent.

The 23-year-old Ortiz has hit 99 MPH with his fastball this year. He also has a slider with a lot of movement that works well as a swing-and-miss pitch if he’s controlling it. His third pitch is his changeup and it’s a clear third pitch at this point. If he’s going to make it as a starter, then it will probably be a slow path, as he command can be inconsistent and he needs to refine his changeup. He has also allowed 18 homers this year, which is twice as many as he gave up in his previous two seasons combined. He could definitely end up as a power arm out of the bullpen, but you can understand why the Pirates would want to wait on making that move.

Analysis: Kevin Padlo has quite a first full week in the system. He had 16 plate appearances and led the system with a 1.429 OPS, going 8-for-15 with two doubles and a homer. He had a .583 OPS in July, so he’s setting himself up for a nice bounce back month. Cal Mitchell returned to Indy from the Pirates and put up a .988 OPS in 20 plate appearances. He was helped along by a triple and a homer.  Diego Castillo was right behind him with a .983 OPS in 25 PAs. He had nine hits, including two doubles and a homer.

Mike Burrows is the lone representative here on the pitching side. He pitched in relief and allowed one run in 4.1 innings. After some hiccups in his first few games with Indy, he had a 2.89 ERA and a .197 BAA in his last five appearances.

Analysis:  Besides Ortiz on the pitching side, Altoona got a solid start from Aaron Shortridge, who gave up an unearned run in his five innings of work. He has struggled with Altoona, which is where he would have started last season if he didn’t need Tommy John surgery. He’s an excellent control pitcher, but his walk rate has skyrocketed this year. With his missed time, it’s best to be patient and see how he comes back for a full season next year. Kyle Nicolas had a strong start as well, allowing one run on one hit in six innings. He had a 3.89 ERA and 81 strikeouts in 69.2 innings this year. Carmen Mlodzinski was solid in extended relief, giving up one run on five hits, two walks and six strikeouts in five innings. He had a 4.62 ERA and 83 strikeouts in 78 innings.

On the offensive side, Endy Rodriguez had a strong first week in Altoona, posting a 1.093 OPS in 22 plate appearances, with a double and two homers. Jared Triolo had a big week as well, posting a 1.073 OPS in 28 PAs, with two doubles and two homers. Aaron Shackelford homered three times and drove in seven runs. He had a 1.055 OPS in 26 PAs, and he now has 22 homers on the season. Connor Scott had a 1.035 OPS in 19 PAs, with three doubles and a homer. Blake Sabol had a .993 OPS in 26 PAs, with two doubles, a triple and a homer. Malcom Nunez had a nice first week in the system, putting up an .834 OPS, with a homer, three walks and a .333 average.

Analysis: Despite being at home, it was not a strong week for Greensboro hitters. Abrahan Gutierrez continues to put up solid stats, collecting a .933 OPS in 21 PAs, while getting a chance to catch four times in one week with Endy Rodriguez moving up a level. Gutierrez had a .926 OPS last month and he’s at an .866 mark so far this month. Luke Brown had a 1.133 OPS in 13 PAs, thanks to a triple and a homer in his brief time. Francisco Acuna had a .929 OPS in 14 PAs last week. No one else was close to an .800 OPS.

On the pitching side, Sean Sullivan allowed two runs in his four innings, but both were unearned. He gave up one hit and struck out seven batters. Dominigo Gonzalez tossed 3.2 no-hit/scoreless innings, striking out five batters. Adrian Florencio allowed one earned run over six innings, with seven strikeouts in his two relief outings. Santiago Florez allowed one run over 3.2 innings. Justin Meis gave up two runs over six innings in his one start.

Analysis: Tsung-Che Cheng was our Player of the Week last week, and he actually did better this week, with higher numbers in all three slash-line categories. He got a vote for the overall top player this week as well, plus he was named as the Florida State League Player of the Week. His 1.253 OPS was the highest for all players in the system with 18+ plate appearances. His .775 season OPS is 91 points higher than the league’s average OPS. He ranks fifth in the league in doubles, first in triples and seventh in stolen bases. Wyatt Hendrie had a big week, putting up a 1.299 OPS in 17 PAs. Third round pick Jack Brannigan becomes the first draft pick to appear here with an .886 OPS in 17 PAs. Brenden Dixon had an .820 OPS in 17 PAs.

On the pitching side, Johan Montero tossed 4.2 shutout innings over two relief appearances. Valentin Linarez had a strong out with six shutout innings on two hits, two walks and seven strikeouts. He has a 1.45 ERA in his last six starts after beginning the year with a 5.80 ERA in his first 13 games (ten starts). He was named as the Florida State League Pitcher of the Week. Darvin Garcia allowed one run over 4.2 innings.

Time for some guys to move up to finish the year at a higher level, so we need to move some guys out to get there.