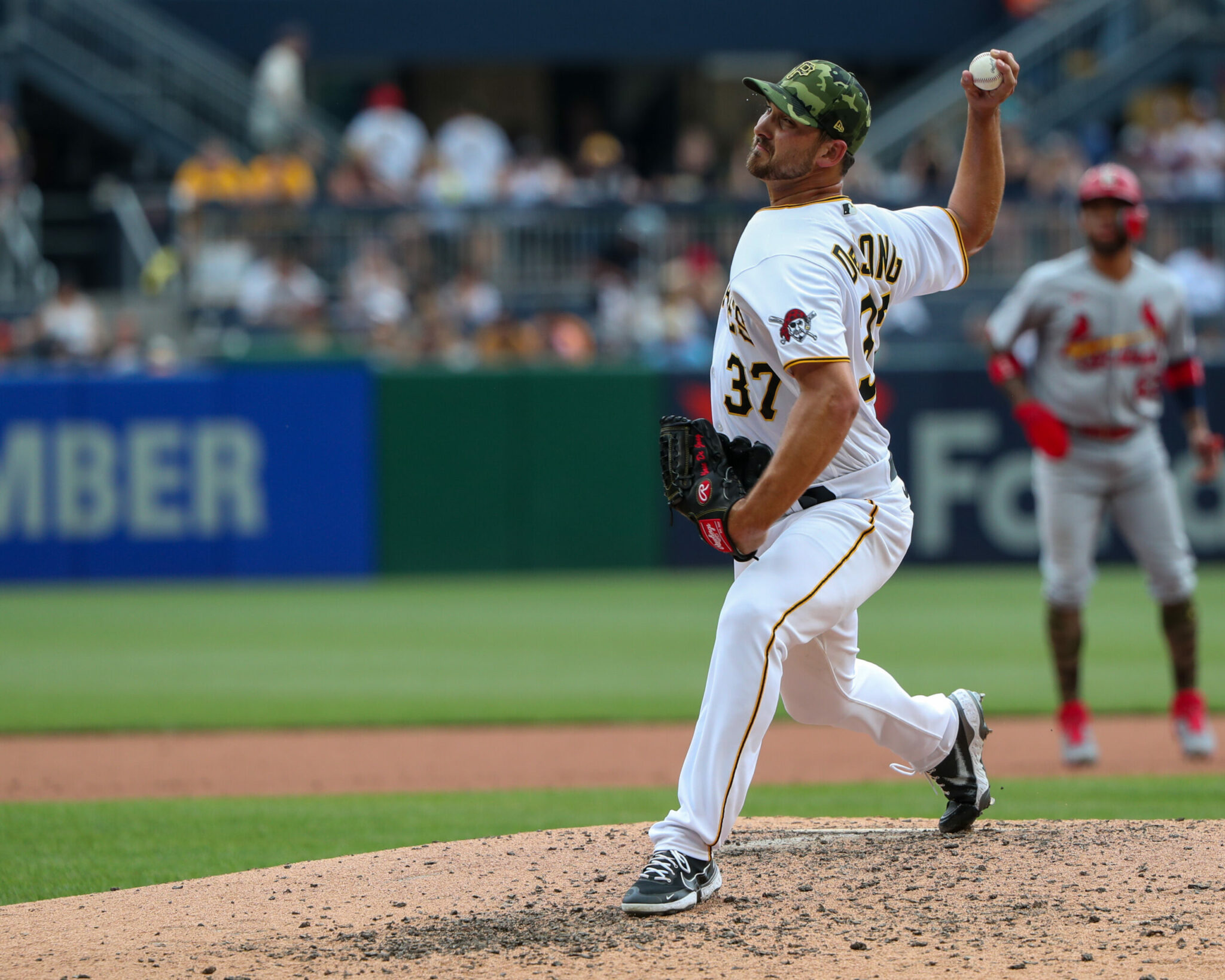 The Pittsburgh Pirates announced some roster moves ahead of Tuesday’s game at home against the Milwaukee Brewers. Pitcher Chase De Jong has returned from the Injured List and pitcher Colin Holderman has been recalled from Indianapolis. They are taking the place of Jose Quintana and Chris Stratton, who were both traded to the St Louis Cardinals yesterday.

De Jong was out with left knee tendinitis. He missed the minimum time, as his 15 days expired yesterday on the team day off. Holderman, who joined the Pirates in the Daniel Vogelbach deal with the New York Mets, allowed one run over three innings in his three appearances with Indianapolis.

The Pirates also announce than yesterday’s acquisitions from the Cardinals have both been optioned to the minors. Pitcher Johan Oviedo heads to Indianapolis and corner infielder Malcom Nunez heads to Altoona. In addition, pitcher Nick Mears moves his rehab work back to Indianapolis.

There could be more moves ahead of today’s game, as the trading deadline is at 6:00 PM and first pitch is 7:05 PM tonight.

I think we acquired a pitcher, Beasly, today.

I was looking at Holderman’s progression. The guy could be a HUGE steal. His numbers have improved every year AND, he’s moved up every year. Now that he’s past his injury issues, and added an extra 4-5mph into his fastball, the guy’s been a beast at AAA and in the majors.

Happy with the return for Q and Stratton, but man is this deadline a disappointment. Here’s hoping for some late-breaking moves.

The depressing thing is there apparently wasn’t anyone else on the roster worth acquiring.

Even more depressing is the fact the Pirates are still holding onto some of these duds. We have no place for VanMeter, Allen, and Marisnick – they are just blocking younger, more talented players. DFA them 3 immediately!

If nobody calls for Newman, Gamel, and Tsutsugo within 2 weeks, they could be the next bunch to DFA by mid-August. Then let next year’s team play the last 45 days of the season.

“If nobody calls for Newman, Gamel, and Tsutsugo within 2 weeks”

I think there are no longer waiver trades after the deadline like there had been up until 2019 (unless that changed with the new CBA but I don’t think it did). The next chance to trade those three is after the WS and two of them will be free agents then anyway. It now should just be a matter of who Ben (and Derek maybe though I’d prefer the decision stay in the front office) thinks should be part of ’23.

Two have been productive (Newman, Gamel) and could help a contending team down the stretch even if they cannot be on the playoff roster. It’s a courtesy opportunity extended to Players who have been loyal soldiers, but will not be part of the long term plans of the team. Two weeks is fair.

Tsutsugo is just a matter of the amount of money they lose if they DFA him immediately – they surprised me unloading him so quickly after the TD.

Chavis is another one that should be gone as soon as they figure out who can play 1B,

I feel the exact opposite.. This deadline is a positive sign that they are done being sellers otherwise Reynolds and/or Bednar would be gone. They have the core in place, young bucks on the way and I think they add this offseason starting to build that competitive team. It’s all part of the plan

They’ll need to add quite a bit if they want to be competitive. A starting pitcher is essential – they can’t run the likes of Thompson and Wilson (or Yajure) out there 2/5 of the time, and you can’t assume you’ll get success from Burrows and Bolton right off the bat. Priester will be held back until June.

Ideally they add another quality reliever to the back end of the pen between Bednar and Yerry/Crowe/Holderman. The rest of the pen can sort itself out. They probably need to dump most of the fungible guys who can’t be optioned anyway (Underwood, Peters, Bañuelos, maybe Beede).

They obviously need a starting C and a starting 1B – there’s no help coming from AAA, and the best candidates at AA are on the shelf.

And if they’re serious about competing, they need to sort out right quick whether they have two starting corner OFs among Suwinski, Swaggerty, Mitchell, Madris, Smith-Njigba and Allen. Quantity is not quality. Guys like Gamel are always available, and while his 1 – 1.5 WAR thing not exciting, it’s a hell of a lot better than < 0.

The more you look at it, the more you realize how catastrophic this season has been at Altoona. Gonzales underperforms, gets injured and stays on the shelf for months. Peguero struggles. Davis gets injured, comes back, realizes he’s not right and is back on the shelf. Fraizer never gets it going, Gorski hits, then suffers a season-ending injury. Even Priester missed enough time that he’s basically been pushed back to a second half 2023 option rather than making his debut late summer. All those guys could have been early ’23 options, now deferred to late ’23, early ’24 at best.

Thankfully an average 1B, somebody like roberto perez to catch, a vet rebound starter, and a LHRP could all be had for probably under 20m. Even 8mil could plug a few holes that BC feels least confident about plugging from within. Maybe it’s naive positivity from me tonight, but I really dont see a team thats so far from being .500ish next year

Bednar is a reliever, so I’m of the mindset to move at peak value. They aren’t winning next year and banking on him being a lockdown closer in 2024 is probably asking a lot. Glad they didn’t move Reynolds though. I’d prefer to see him extended.

I’m more disappointed by the lack of movement across the board with the team. Either trade whatever has value that isn’t nailed down or cut the chaff off the roster (Yoshi, Vanmeter, etc.). Just do something to improve this club by subtractions.

But we have Bednar under control for 4 more years..That’s someone you keep IMO.

GMBC has to be licking his chops at all of the flotsam to be released in the next day or so. He’ll find his Justin Turner yet!

I can’t imagine they DFA Yoshi and VanMeter today right? That would be a tomorrow move assuming they aren’t traded. Unless there’s a bus bringing a couple Indians from AAA on the way to the park now.

Yep. Or maybe even after Thurdays noon game. Give them some travel time. Also, Indy is hurting for players. Been like 1-3 man bench there for a while.

Thank you! Having a real reliever sitting k the sidelines was maddening.