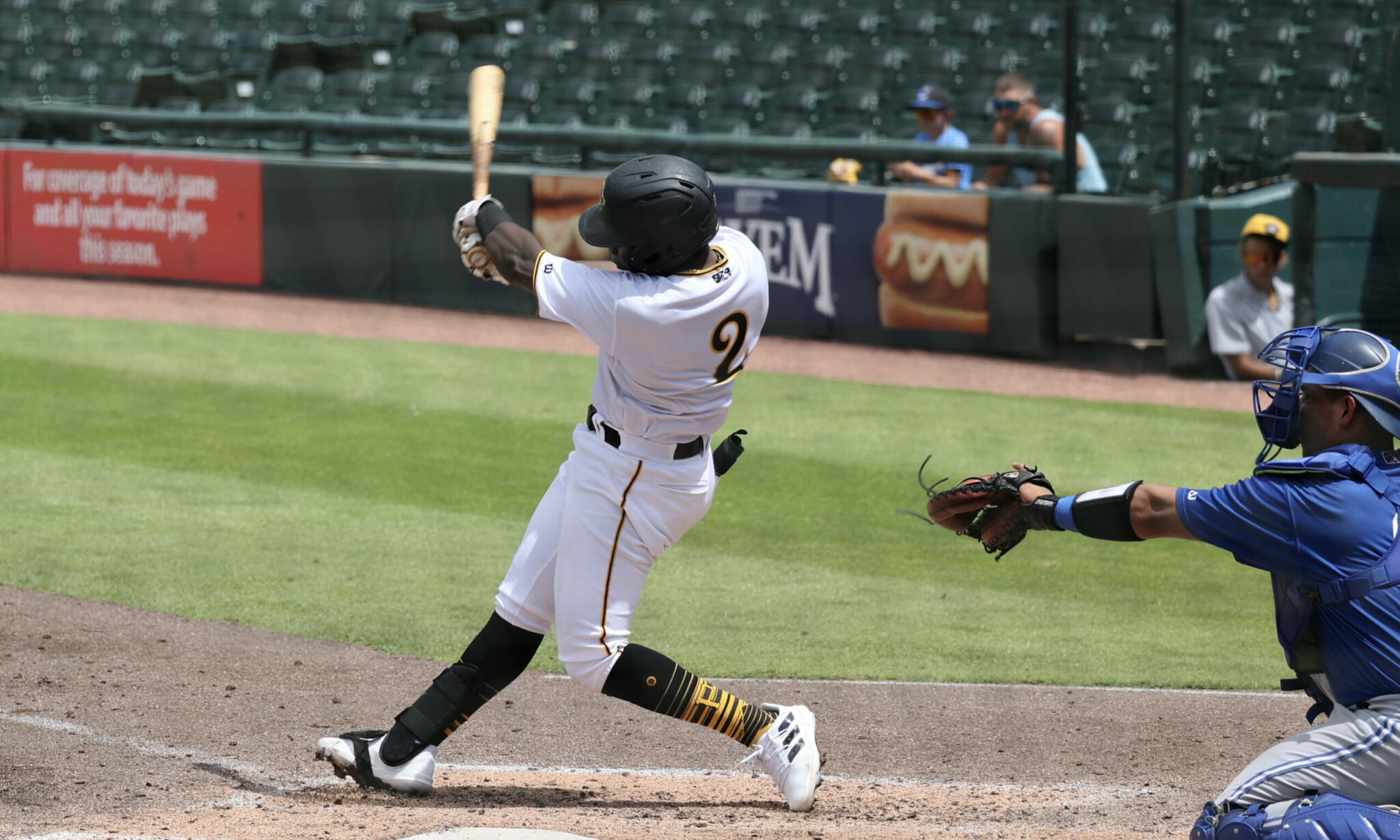 This is our fifth look at the progress of the 2022 draft picks of the Pittsburgh Pirates.  All 11 players who have seen action so far are listed below, and no one new joined in this week, so we have probably seen all of the players who will play game this year. The Bradenton season ends next Sunday, though they still have a good shot at making the playoffs, so that will extend the season for some players.

Here’s a look at each 2022 draft pick who has appeared in a game this season. They are sorted by draft round.

Termarr Johnson (1st round) – The fourth overall pick in the draft was off to a slow start in the extremely early stages of his pro career, then caught fire this week. He batted .130/.310/.217 in nine games with the FCL Pirates. He has now played nine games with Bradenton, where he is hitting .308/.387/.423 in 31 plate appearances. He committed his first error in 59 chances on Saturday.

Jack Brannigan (3rd) – Brannigan was the first player from this draft class to see action, and he has been at Bradenton for the longest amount of time. He has played 23 games total, including his two games with the FCL Pirates. He got off to a strong start, but has really cooled down at the plate. Since joining Bradenton, he is hitting .203/.308/.354 in 91 plate appearances, with three doubles, three homers, ten walks and six steals. He has flashed a nice glove at third base.

Tres Gonzalez (5th) – Gonzalez played one game with the FCL Pirates, and he’s up to 19 games with Bradenton, getting into the lineup on a daily basis. He’s hitting .323/.397/.369 with the Marauders. He has two extra-base hits, collecting a double and a triple. He also has two steals and two walks. He has struck out ten times in 76 PAs.

Derek Diamond (6th) – The right-hander made his debut with the FCL Pirates on August 16th and tossed a scoreless inning on one hit in his first game. He pitched again three days later and threw another shutout inning, with no hits or walks, and two strikeouts. He last pitched 13 days day, throwing two scoreless innings on two hits, one walk and he struck out two batters. He has not joined Bradenton.

Cy Nielson (8th) – The lefty threw a scoreless inning in his pro debut with the FCL Pirates. He then moved up to Bradenton, where he gave up three runs, while recording just one out in his debut. In the next two games combined, he threw 2.1 shutout innings, allowing one hit and one walk, with two strikeouts. That was followed by a rough outing on Tuesday, when he gave up four runs (three earned) in two innings, giving up four hits and two walks, while picking up three strikeouts. He bounced back on Friday with two scoreless frames on one hit, one walk, one strikeout. He has a 7.04 ERA in six games, with eight hits, seven walks, two hit batters and seven strikeouts in 7.2 innings.

Mike Walsh (9th) – The right-hander has pitched four times, once for the FCL Pirates and thrice for Bradenton. Each of his first three outings saw him give up one run in one inning of work. In his last appearance, he recorded just one out, while walking three batters and allowing a run. He has allowed four hits and five walks in 3.1 innings, while striking out three batters. He was recently assigned to the FCL Pirates, which could mean his season is over, but we will see.

Tanner Tredaway (10th) – The outfielder played two games in the FCL before joining Bradenton on August 12th. He’s hitting .200/.385/.300 in 15 games with the Marauders. He has two doubles, a homer, ten walks and two steals. He has struck out nine times in 57 plate appearances.

Nick Cimillo (16th) – The only catcher drafted by the Pirates this year played  four games with the FCL Pirates before joining Bradenton. He has played six games with the Marauders, seeing time as the backup to Wyatt Hendrie. Between both stops, he is hitting .217/.333/.217 in 27 PAs.

Jaycob Deese (17th) – The right-hander pitched three games for the FCL Pirates, allowing one unearned run over four innings, on three hits, one walk and five strikeouts. He has not joined Bradenton.

Elijah Birdsong (18th) – The right-handed pitcher made four appearances for the FCL Pirates, allowing three runs on two hits and three walks, with three strikeouts in four innings. He has not joined Bradenton.

Ryan Velazquez (NDFA) – The only non-drafted free agent signing for the Pirates debuted with the FCL Pirates and allowed a hit and two walks in a scoreless inning. He then gave up two runs on five hits in his second game, while recording one out. He has not pitched since then.

The only position player yet to appear is 15th round pick Josiah Sightler, and he won’t be playing any games this year. The other eight yet to appear in any games yet are pitchers. Hunter Barco, Michael Kennedy and Julian Bosnic were all immediately ruled out from games over the rest of the season. No word on the other five, but it seems unlikely they will play at this point. We will continue to do Sunday updates on the draft picks until the season ends, including playoffs if Bradenton makes it. Going into Sunday, they are one of three teams within a 1/2 game at the top of the standings.

If TJ is the real deal, nobody else in the draft needs to be anything more than a bit player, and it will have been a great draft!

“… and thrice for Bradenton.” Deep respect for using “thrice” in a statement.

I entered it into my vocabulary when I heard Mr Burns use it while giving Homer signs in the Softball episode https://www.youtube.com/watch?v=jlzEjXu6QGQ

Wasn’t a huge fan of the band Thrice’s music though I thought they were decent but I always thought they killed it with the name for the band. Thrice is one of very few words that sounds both savagely fierce and sophisticated at the same time.

Agree with the thrice respect. Although not as fierce but definitely sophisticated is the word “whilst”. Just not a word thrown around that much.