P2Daily: Blake Sabol Playing More In The Outfield With Indianapolis 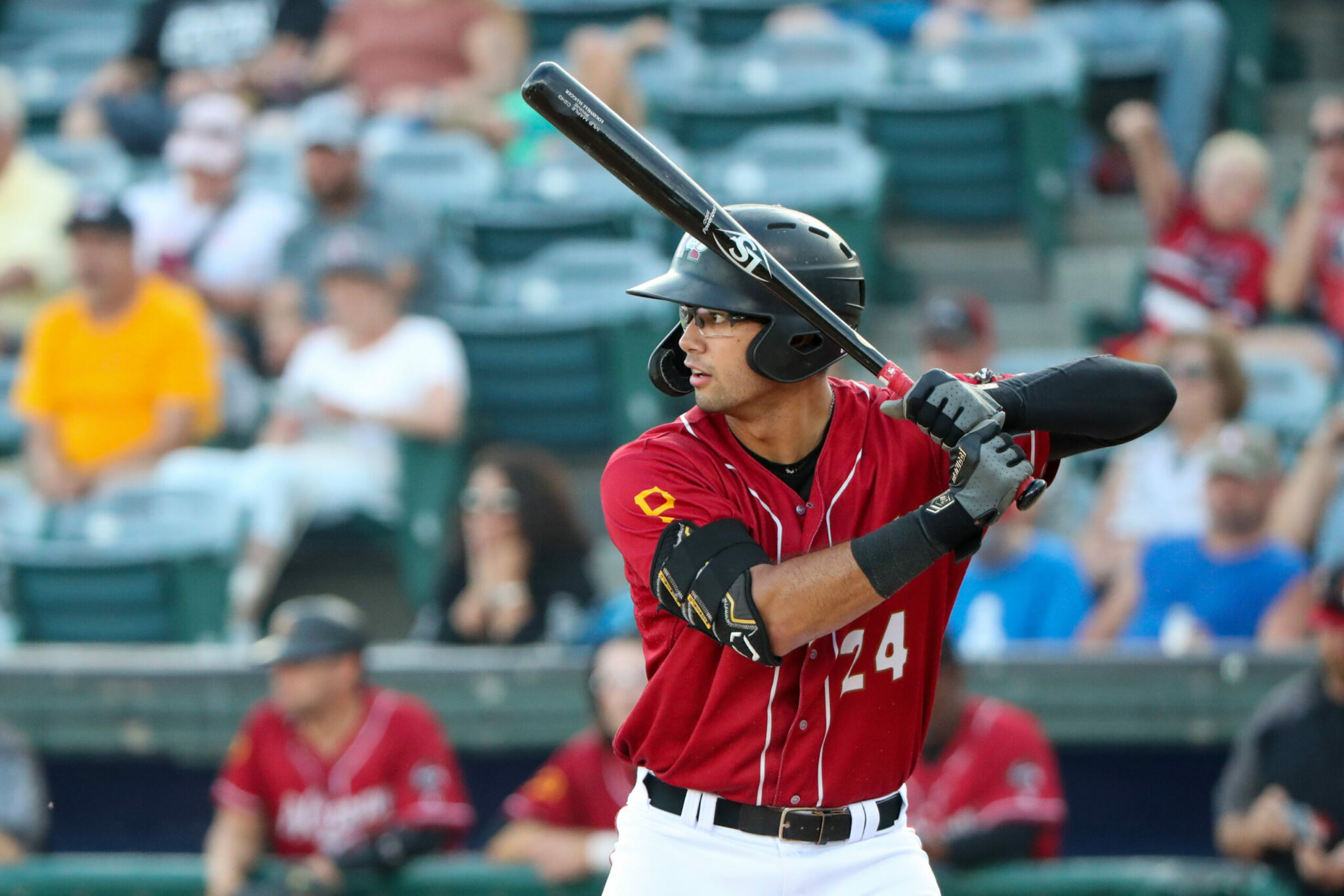 The path that Blake Sabol took to Triple-A wasn’t likely what the Pirates had in mind going into the season. He started out in Altoona, pairing up with Carter Bins behind the plate. With the latter struggling to start the season, Sabol took over the primary catching duties.

While originally not thought as a catching prospect, Sabol took some steps in the right direction in the added time, and when Henry Davis was promoted to Altoona, it was Bins that moved up to Indianapolis to join an even bigger crowd at the position.

That allowed him to split time with Davis in Altoona. When the former first overall pick went on the injured list, it was again Sabol who took over the starting job.

Now in Triple-A with Indianapolis, Sabol rejoined a crowded catching position, but this time he hasn’t been forced into any playing time behind the plate. In 19 games with the Indians, Sabol has caught just five times, instead playing in left field for the most part.

Knowing that Davis and Endy Rodriguez were right behind him in Greensboro to start the season, having Sabol in Altoona was always going to lead him to primarily playing in the outfield — it just took a promotion to Indianapolis and the majority of the season to get there.

Along the way he added some invaluable experience behind the plate, and the focus on the outfield in Triple-A hasn’t hurt his production, as he’s slashed .303/.425/.606 with nine extra-base hits (five home runs) and 14 RBI in 19 games with Indianapolis.

— Jack Suwinski is in the midst of a 1-for-30 slump, and is right back having troubles with striking out — he has 15 in that same span. Whatever it was that allowed him to hit so well coming up the system since coming to the Pirates, he completely shifted once he got to the majors and hasn’t been able to get back on track. Even sending him back to Indianapolis, it was more of the same. He’d strike out a bunch and then he’d hit one really hard and the issues were ignored once again.

— I don’t talk about the big league club often, but after watching the last two games there seems plenty to say. A lot has already been said but some of it directly impacts the system. The Pirates have two 40-man roster spots open, and too many Rule 5 options for this winter to have Eric Stout pitching in the ninth inning of a game in late September.

Maybe the results aren’t better, in fact they could actually get worse but at least those eight run innings that they gave up go towards the future and not just the latest waiver wire pickup. Maybe they want to hang on to those spots till the off-season, that’s fine. There are still names that have no business pitching right now picking up way too many innings near the end of the season.

Today: Dickens of a Start

Wait, they’re still playing? I’d rather spend time checking my fantasy football league waiver wire than seeing who the Pirates sign on theirs.

But Chicago comin to town!!! At least a better chance for a win against them 🙂

Hopefully the Pirates don’t sign a handful of mediocre veteran retreads this off season, and block the likes of Henry Davis, Sabol, Gorski, Triolo, Bolton, Burrows, and others at the AA/AAA level from getting reach chances to make the major league roster next Spring. The ones I named are all in the 24-25 age range and have little to gain from my more time in the minors. Younger guys like Priester and Rodriguez deserve real opportunities as well. The only “safe” players to be givens on the Pirates roster for 2023 should be limited to Reynolds, Hayes, Cruz, Keller, Brubaker, Contreras, and Bednar.

Given their size and the very crowded OF situation in the system, I would like to see guys like Mitchell and Sabol play first base. They both should be athletic enough and tall enough to be potential good fits there….as with just about every position, the Pirates need a lot more offensive production from first base. Chavis is a nice bench piece and bat, but not so much as a full-time starter anywhere…

We have a crowded OF situation in name only. None of them are top flight prospects.

When you don’t care about the fan base, you make moves like we’ve seen in the last 3 years.

Glad that Sabol has had a good year, he is forcing his way into the future conversation starting next spring.

BNP would love Sabol as the Utility Catcher. He still misses Bethancourt being part of the mix in the Pirates organization ﻿ 😀 ﻿

Why? Why you gotta bring that pain into existence?!?!

Last edited 10 days ago by robertkasperski
1

BNP when Sabol makes it to the show

Hank is 4 inches taller than chavis and assuming he can pick it/handle cruz’s velo from days as a catcher. Im down with the idea of transitioning him to 1B

They have enough average outfielders in the pipeline. Try him at first.

I never got the cries to recall Jack Suwinski while he was continuing his whiffing in Indy. I personally thought TSwags was the better callup. But, in the end, neither would be sniffing the majors if the parent club wasn’t so bad. We have ONE bonafide starting OFer. The rest are DHs (Mitchell) and ‘converted’ infielders.

I didn’t want Suwinski sent down as even the best major leaguers can go on 0-20-something slumps (Trout did, for example). But when he continued to struggle in AAA I realized that it was for the best. I was very surprised when he was recalled as Mitchell, Bae, and Swaggerty seemed more deserving (though with Swags it may have been a personal matter) and it contradicted any logic behind sending him down. I bought into the FO’s initial decision and then they completely undermined that decision–I didn’t like him being sent down but I disliked him being recalled even more.

Most worrisome, is the time that he was down is approximately how long he needed to be down to avoid being eligible for Super Two. Either the FO really did see signs of improvement which I’m not seeing, or it was about the money.

It’s easier to understand fans wanting Jack recalled than the dimwits in the FO actually recalling him. The guy needs to be someplace where he can relearn baseball. This isn’t rookie struggles, it’s a complete breakdown.

But, it’s just like these morons. Of all the available upper-level OFs (Swags, Sabol), Jack is the one who shouldn’t be in the bigs. So of course that’s right where he is. I don’t know how you can achieve the level of incompetence these dolts have reached without literally trying to make the worst possible moves.

My real concern for a long time has been that your last sentence is the best description of the “plan” the Pirates have for the future. What if they’re not “morons” but are doing precisely what they need to in order to achieve their goals?

What if the real plan is to keep making money by doing as little as possible and Cherington’s actual goal is to shuffle the pieces around to confuse and confound the fans while keeping expectations low?

Like all fans I hope they’re really trying to build a winner, but do I actually believe it? Not yet. Do you? There are numerous moves they could make during the upcoming off season that might indicate otherwise, but until they come out of hiding and do some of them it’s difficult to believe winning now or at anytime in the future is part of that “plan.”

I think the “plan,” more or less, is to do stuff that sort-of looks like stuff you’d do if you were trying to build a winner, but not to get too worked up about it. No urgency, no accountability, just keep everything chummy and comfortable, and rely on the fact that Nickels doesn’t care, as long as there aren’t any negative, off-field stories in the media like there were at the end of the last regime.

You do all this by bringing in legions of waiver wonders because these are good “clubhouse guys.” They have to be, because nobody but the Pirates would employ them, so they have to get along. That’s the kind of guy Hodge ‘n Podge want. You don’t churn the roster any more than you can help, because a troublemaker might slip in. You try to delay bringing up rookies because if they suck, it undermines your claim that you’re building a development juggernaut.

And losing is just fine because winning creates its own sort of pressure. You get to .500 and, damn, the fans want to see you win something! If you’re not careful, suddenly you’ve got — gasp!! — expectations and accountability. The absence of those things is what brought Cheringtoon to Pgh.

I think you guys are overthinking this…things tend to happen slowly, then all at once.

Wouldn’t surprise me to see Suwinski spend most of the year in the minors next year, maybe even as low as AA.

AA is where I’d send him now if it was feasible.