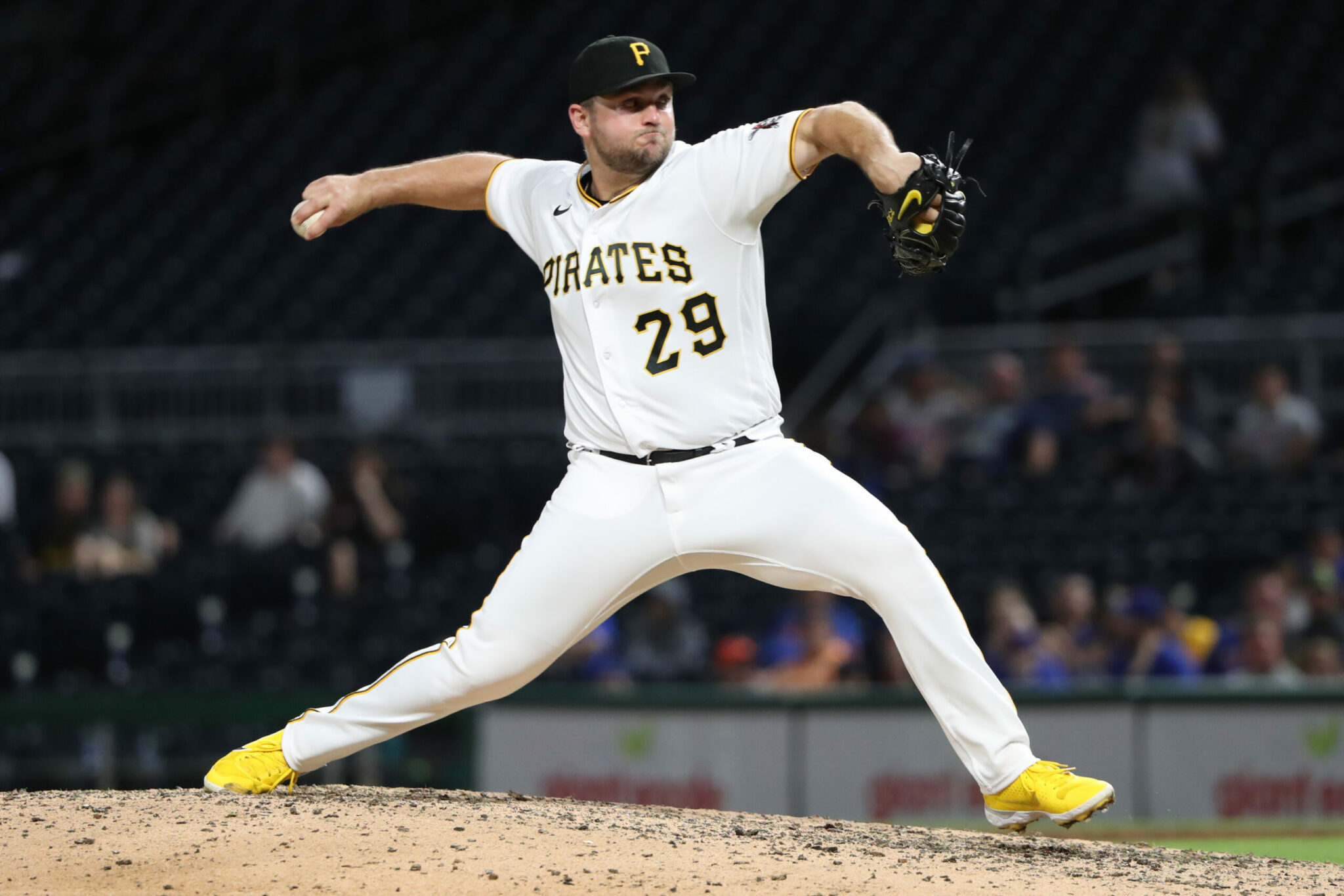 The tale that is the 2022 Pittsburgh Pirates bullpen can probably be told in two halves – before David Bednar registered 50 pitches against the Los Angeles Dodgers, and how he did after before landing on the injured list.

Bednar’s struggles after that night and eventually IL stint exposed what we all expected – the bullpen was very much thin behind him. Some of the better stories of the season, Wil Crowe and Yerry De Los Santos, either fell to injuries or was ineffective in a higher leverage role.

That’s led to the Pirates having the third worst bullpen ERA, issuing the second walks and fifth highest opponent’s average. While they’ve pitched the fourth most innings, they have the 15th highest strikeout total as a unit.

Chase De Jong has been outstanding this year, and Yerry De Los Santos showed promise before going down with an injury. Wil Crowe even had success in certain roles out of the bullpen.

Crowe, however, has struggled when handed late inning situations with Bednar injured currently. He has a collective 5.50 ERA in the eighth and ninth innings combined, and a 1.60 mark the rest of the time.

While the rotation hasn’t been perfect, they’ve certainly kept the team in games that they probably had no business staying in, with the bullpen blowing things up.

It’ll be anyone’s guess how exactly the Pirates will approach the off-season, but really retooling the bullpen should be close to the top of the priority list. You can make a slight argument that there may be enough prospects knocking at the door next year that you won’t want to do anything to permanently block any of them on the offensive side of things.

They’ll still need to get some starters, potentially throughout free agency, but adding multiple proven relievers not only won’t impede on anyone coming up in 2023 but is a great way to improve the team without breaking the bank. With some of the teams top pitching prospects likely making their way to the majors next year, it’d be nice to have some added security behind them to hold things down in the late innings.

— Henry Davis played in his first professional game in right field on Saturday, and got to flash his arm in a small showing after an Erie hit a base hit to him and he fired the ball in to second to limit it to a single. It looked like his feet got crossed up a bit when going after a fly ball, but that’s not a surprise seeing it’s his first time out there.

While he isn’t the most agile of players, he isn’t someone who automatically relegate to first base if it’s not going to be behind the play, especially due to his arm. This feels like a ‘let’s give it a shot, because why not, and if it don’t work there’s always first base’.

— Termarr Johnson walked four times in the last two games, giving him 10 now in 14 games played with the Bradenton Marauders. He has a 12.1 BB% which nearly matches his strikeout rate at 15.8%.

He’s still 18-years-old and will still be that age when the 2023 season starts. Due to that, you almost wouldn’t blame the Pirates for starting him again in Single-A — you would almost wonder if they’d be interesting in seeing how he would respond to such a challenge in High-A.

That’d be incredibly aggressive, as Bradenton’s season would end tomorrow with a loss or Dunedin win, leaving him with just 14 games at the Single-A level. He’s really figuring things out incredibly quickly however.

Today: Prospect Watch: Last Day of the Season for Bradenton and Greensboro

This bullpen is the worst in my lifetime. It’s such a joke, I really believe this team has lost 25 games because the bullpen is awful.
Bullpens can change year to year and if they can figure it out and just have an average bullpen they can win a good amount of games next year.

BP is certainly a big need. How about 1B as well? Who are the expected FAs available that would be quality for Bucs to add to the roster for next year?

That’s a silly question. They only look in dumpsters.

The bullpen is a bit confusing to me, as i see de los santos, bednar, holdermann, crowe, and banuelos all as guys who have been reliable and effective as a whole this season, yet the pen as a whole has really struggled. It feels like there is actually a decent base to build from

If you look at the BP, they’ve had 18 guys throw less than 20 innings this year. Several of them were position players. As a group they struggled.

If and when they decide to focus on wins they can reduce / remove most of those innings.

Position players can only pitch if the game is out of hand. The starter and relievers have been ineffective.

My question is whether any of the AA pitchers will be ready to get MLB outs next year. That’s a scouting question. AA success does not imply MLB success.

Introduce a new show to MLB Network this winter called, Bullpen Rescue. With the Pittsburgh Pirates as the first team to be featured.

Hosting the show will be Brian Kenny, with a former MLB GM/MGR types as the co-host. Using a combination of scouting and analytics, the hosts give BC a game plan of minor league promotions, trades, and signings to make this winter to retool the bullpen from a loser to a winner.

Best part of this idea for us Pirates fans is it removes BC from making the decisions on bullpen construction.

Nice idea and turn of phrase. But BC has done it before and has a pro scouting team to support him. Most rebuild manuals argue for BP construction late. Are we there yet?

I drank no Kool-Aid, but I did do some research. Try it, you’ll like it.

I wish I could share your optimism for BC’s capabilities.