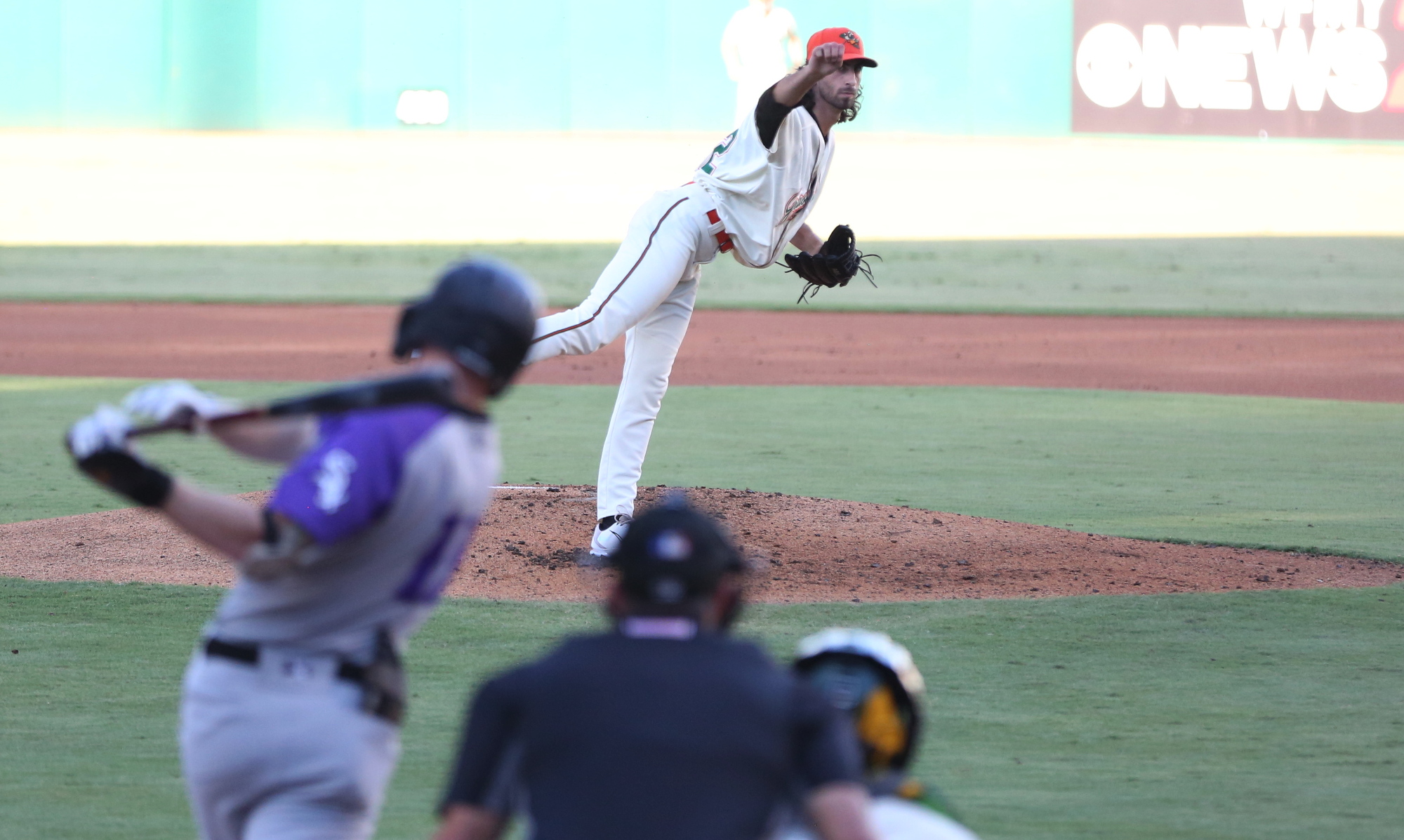 GREENSBORO, NC – Yesterday, I got my first look at Ricky DeVito, a right-handed pitching prospect who the Pirates acquired from the Braves last year for Richard Rodriguez.

DeVito has been pitching for Greensboro this year, and on the season he has a 4.70 ERA in 67 innings of work.  He has mostly pitched as a multi-inning reliever this year. However, the Pirates have been getting him work as a starter since the beginning of August. Last night he went four innings, giving up two runs on three hits, with a walk and eight strikeouts.

It was a great result, and the strikeout below to end the second inning is a sample of what makes DeVito so interesting.

First of all, the splitter that DeVito throws is nasty. He can drop that pitch in for strikes, leaving opposing hitters with no chance. He can do this pretty effortlessly, as you can see in the second pitch of this three-pitch strikeout.

On the third pitch, he looks to add a little bit of effort, and while he gets the strikeout, the ball does flirt with leaving the zone, only to be saved by an outstanding framing job by Abrahan Gutierrez.

Watching DeVito from the side, there was a common issue I saw.

DeVito doesn't have a steady landing foot. The third pitch of this video is the second time I've seen him slip and lose his balance today. This doesn't help his control. 40 walks in 63 innings heading into today's game. #Pirates pic.twitter.com/QiV90nXfma

On the night, DeVito was the only pitcher who was having issues with the mound. In the third pitch of the video above, he slipped and lost his balance. I don’t usually like to show these kinds of blooper type clips, because players make mistakes all the time. I kept this because it was something which happened a few times on the night.

DeVito has ridiculous strikeout numbers this year, with 87 in 67 innings after adding eight more last night. That splitter has to play a big role in the season total.

He also struggles with control, with 41 walks in 67 innings. My guess is the control issues come from this inconsistent landing.

DeVito has high effort arm action, and if his foot doesn’t land steady, he’s very capable of his upper body getting thrown off balance. He would also have the tendency to yank his pitches across and out of the zone, especially on pitches where he adds a bit more effort.

He only had one walk last night, but it came in a high pressure situation. DeVito set down the first eight batters in order, before giving up back-to-back soft singles in the third. After a double steal, he issued that walk — with his effort ramping up and his control faltering. A double followed that, bringing in his two runs.

The unsteady landing isn’t a new issue for DeVito, although his splitter has been the bigger focus, and rightfully so. You can’t teach that splitter. You can teach Ricky DeVito a consistent steady landing.

Here is that Ricky DeVito (@DeVitoRicky) splitter that I spoke about earlier. (cc: @PitchingNinja) pic.twitter.com/698YIIjFBD

Overall, it was a great first impression. DeVito’s stuff is nasty, and if he can consistently drop that splitter in for strikes, he could reach the majors. He’s going to need to fix his control issues first, and I think that just has to do with the effort level on his pitches. His normal is already high effort, and it’s effective. When he starts to ramp it up, that’s when I believe the issues come into play — and with his stuff, it seems unnecessary that he add anything additional effort.

I’m in Greensboro this weekend, and will have coverage from the team in Tuesday’s article drop.

Today: Behind On Hitting, Ahead On Pitching

He looks like a gas house gang member. Bugs never had to face that splitter, though.

Rule 5 draft should be interesting 🤔

Thus far, though, Danny has had a better movie career. Plus, he can throw an overhand submarine pitch.

I’m a fan of Ricky, glad that he has stay healthy this year and accumulate enough innings to perhaps start again next year. All depends on his control of course! Still see him as a very useful bullpen piece in Pittsburgh in a couple of years,

He needs LOTS of work, obviously. We can only hope.

I was able to stop and start his delivery and he lands on the heel of the lead foot unlike most pitchers who have been taught to land on the ball of the lead foot. Then the heel digs in and the toe comes up and turns toward 1B. At that point, the ball has been released toward the plate. His follow through and his head follow to where he does not go forward but instead just rotates toward 1B, and the right foot swings around and rotates toward 1B also.

Normal for a RHP is the lead or left foot is online with the target, landing at about a 45 degree angle and the back foot comes around to the right so that at completion the pitcher is looking directly forward to the plate. When he completes he is facing sideways to 1B. Most unusual delivery I have ever seen.

Last edited 22 days ago by CTBucco
1

He needs some work with an old friend of mine and for many fans in Altoona – Jeff Andrews. He is still a pitching coach for the Rangers at AA or AAA. Jeff had the Goalposts method of throwing. Hips, Elbows, Shoulders, and throwing hand with ball facing backwards, all on line with the plate. Watched him and learned a lot of different subsets of the drill to get young pitchers online so that throwing strikes was not such a mystery.

He’s very inexperienced, which probably explains the move to the rotation. Does the stuff, which is outstanding, survive moving to a more conventional motion? IDK.

That was exactly what I was thinking. But, the way he is throwing now, there is no wiggle room on his release point. 40 walks in 60+ IP means between 5 and 6 walks a game.

You can’t be a starter with that sort of control. But it is big stuff. Dreaming is allowed.