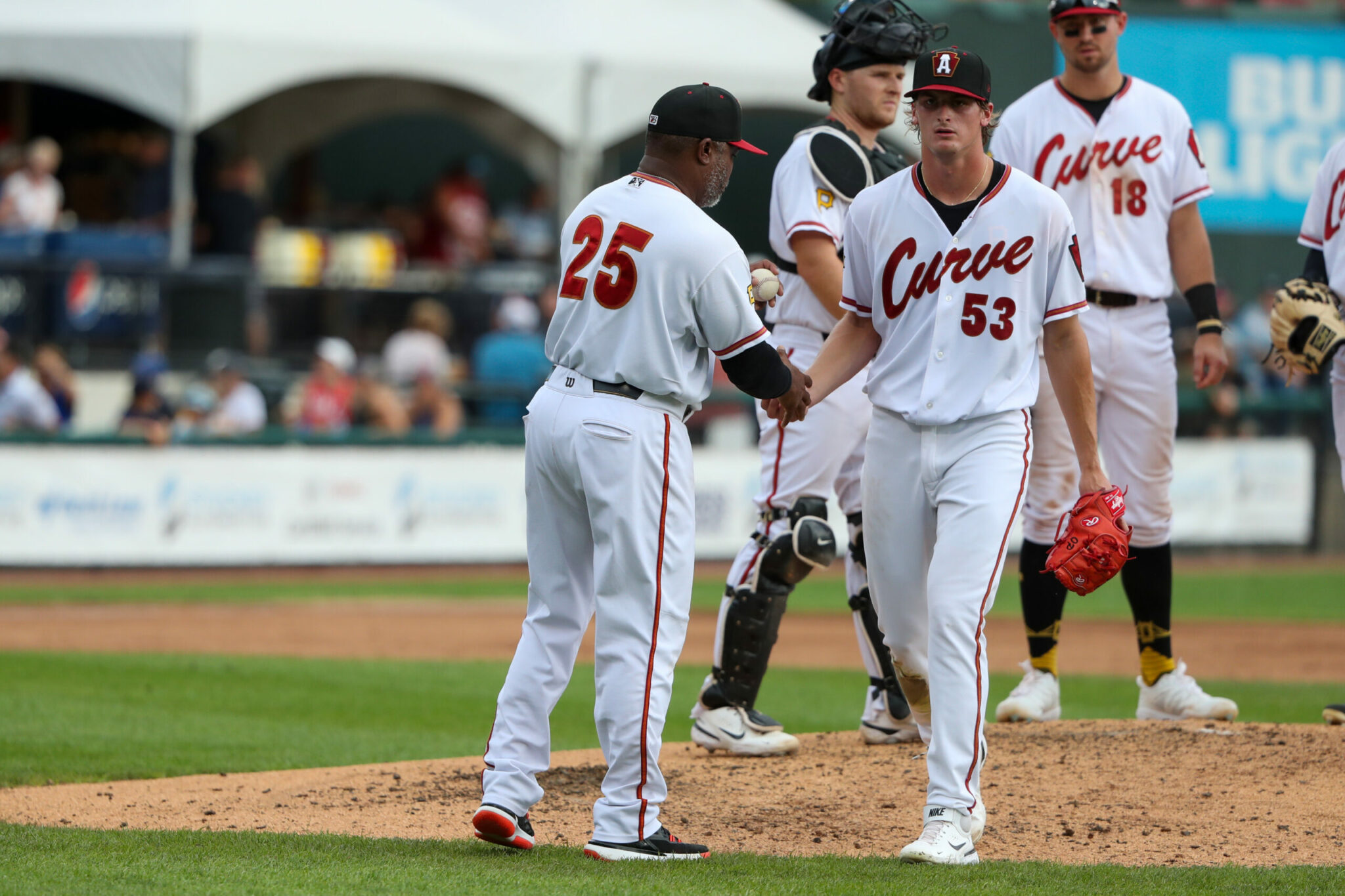 A few Monday’s ago, the Pittsburgh Pirates broadcast had prospect Quinn Priester on during the game and Matt Capps and the young pitcher got into an interesting discussion about his arsenal.

The conversation carried into talk about just how Priester utilizes his sinker and whether he throws it on both sides of the plate, with the former first round pick mentioning that it’s a work in progress.

Capps then gave out a few pointers in what helped him, with the focus eventually going back to the game. Fast forward to last night and Priester put in one of his better performances of the season, needing only 75 pitches to finish seven innings of shutout baseball.

Priester utilized the sinker on both sides of the plate, and was really effective throwing it to his glove side, the very thing that he admitted he hadn’t mastered yet. It wasn’t just here and there, he used the pitch in several key situations, including setting up strike outs to get a few of his eight ground outs through the game.

The best part about Priester starting to be able to hit the strike zone on the back door sinker is how it sets up, and plays up the slider even more, especially against righties. Priester had the sinker and slider combination working for him throughout the night, and above are a few instances.

There are four total pitches in the top video, two instances of back-to-back times that Priester started the sinker away and broke it in the zone and then followed it up with a slider the very next pitch. The first hitter took the called strike before missing on the slider as the follow up pitch.

While he couldn’t get the chase against the second batter, he was still able to set up the pitch with the sinker the pitch before.

The final clip shows three different back door sinkers Priester threw throughout the game, getting groundout with one of them.

Priester throws five pitches, which can be a lot for some pitchers but it’s starting to look like he’s learning how to best use each offering and what works best together.

While he still doesn’t generate the kind of strikeout numbers that you normally see out a top prospect, there’s no denying he is getting the results at this point, and when you reach the majors a win still counts as a win, no matter how it comes together.

Carmen Mlodzinski: Experimenting With Best Approach On The Mound In Altoona

Yesterday: Pirates Discussion: Is It Spring Yet?

Question for the group. With the changes to the rules to prevent shifting starting next season, will Pitchers who are “pitch to contact” like Priester seemingly is, be devalued? One would think more ground ball singles will be had next year, thus high SO/9 Pitchers may become even more valuable than they already are.

😆. I thought about that too, not just Priester but the majority of the MLB staff has become sinker heavy! That also brings to question having average or lesser fielders at SS/2b!

I agree, I think they will become more susceptible to giving up weak hits, additionally i think IF defense will probably become incentivized to a degree as 2B for example will have much less help with lefty pull hitters up

One question that I keep asking myself as I watch this, where is his top graded curve? Not a complaint, slider sinker combo was terrific yesterday, just find the evolution or rather development very interesting! Imagine if he develops a good two seam change to add to that.