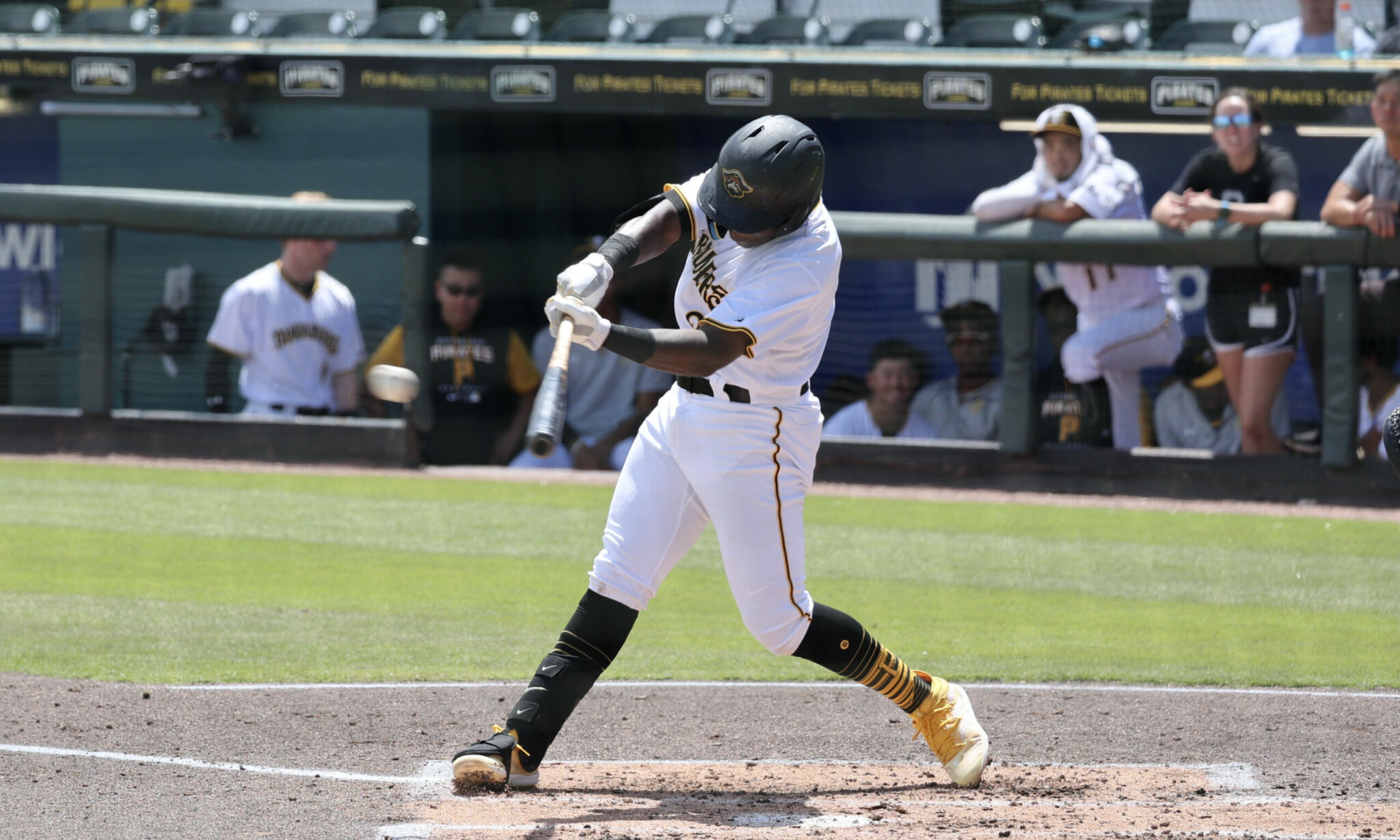 Since Termarr Johnson entered this past Tuesday’s game as a pinch-runner, he has seen the field in each game this week for the Bradenton Marauders, giving us our best look at the Pirates 2022 first round pick.

Let’s just say he’s having himself quite the week already.

Johnson has gone 7-for-11 this week, with four runs scored, three doubles, a stolen base, and has drawn as many walks as times he has struck out (three).

It’s been two plate appearances that have really stood out so far for me, one of which a double and the other a fly out to center field. Both have been featured on the Daily Video Rundown over the past two days.

Great overall at bat by Termarr here. Shows a great eye holding off on two low pitches. Tries to jump out in front of a fastball away that he misses on. Two pitches later takes similar pitch in nearly same spot the other way for a double #LetsGoBucs pic.twitter.com/Hit1YXLCws

This was the first of a three hit day for Johnson, showing some great patience in holding off on some really close breaking pitches. He swings and misses at a fastball away, but adjusts almost immediately as he got another one two pitches later that he goes the other way for a double.

Even getting out, a lot to like from this at bat from Termarr Johnson. Incredible ability to get bat on ball. Even squares up that curveball he fouls off on the check swing #LetsGoBucs pic.twitter.com/7bV5ZgTRBt

The second hit came in his first at-bat on Friday, working another full count, this time after falling behind 0-2. He takes some really enticing breaking balls, one close enough the pitcher tried to work it in his favor and started to walk off the field. Johnson was able to barrel up the payoff pitch, hitting it 105. 2 mph off the bat to center field for the second out of the inning.

Johnson has been hitting the ball well this week, so it should be no surprise that he has seven batted balls with an exit velocity of at least 100 mph. His batted balls have averaged 102.5 mph and a launch angle of 17.6°. No matter the sample size, that’s incredibly impressive for an 18-year-old.

— After a very rough start to the season, Domingo Gonzalez has been solid for the Grasshoppers the last two months. He has nine wins on the season after getting the decision on Friday against Winston-Salem. In July and August the 22-year-old Gonzalez struck out 35 batters in 38 1/3 innings while posting a 2.58 ERA and holding his opponents to a .200 average.

He picked things back up in his first outing of September, striking out five in four innings while allowing one run and three hits.

— Nick Gonzales continues to be one of the more confusing prospects in the system for the Pirates. He’s hit really well since returning from injury, but taking a look back at some of his games, the big hits are coming against the fastball. The struggles are still there with the breaking ball.

It feels like this topic comes up, but any time a top 10 pick hits well, it’s going to get noticed, especially if he was struggling previously. Gonzales has missed a lot of development time due to injuries, so it’s understandable if there are parts of his game that need fine-tuning.

Long-term I don’t think there will be an issue, he heads into the offseason with a clear goal in mind, and still looks like someone who can be at the very worst an ‘average’ hitting second baseman. He’s also played a lot better defensively than you might think someone with the ‘hit-first second baseman’ profile.

Yesterday: Behind On Hitting, Ahead On Pitching

Anthony, if you see this I am interested in your response. I am interested in your observation that Gonzalez defense has been better than expected. Is that metric(fWAR etc), eyeball, fielding % or ‘other’ or all of the above driven? I have a miserably small sample size of 2 games watched in person with Gonzalez on defense and he just didn’t seem to have that defensive feel. He didn’t knock down balls barely out of his reach that appeared to be apparent outs from second base (total of a whopping 2 times) and also didn’t seem to have a feel as to where to throw the ball a few times (another huge sample size of twice). I am obviously totally overplaying my minimal sample size because that is exactly what it is.

It’s been mostly the eye test. Is he a gold glover? No. But when I hear the ‘hit first second base’ profile, I think a below average defender. I think he’s more than that

A wasted year for Gonzales and he still needs to learn to hit a breaking pitch. You would think that a highly rated top no. 1 pick should be able to hit after 4 years of college and a couple years in the minors. Great scouting.

I would be much more concerned if his walk rate was anemic, but he is getting on base at better rates than most of his contemporaries.

I was there Wednesday when he hit that double and one thing that impressed me was how he ran hard right out of the box. One of my baseball pet peeves is batters going less than 100% towards first and then turning it on headed to second trying to stretch it to a double. When he hit it, I glanced at him and it was obvious he was thinking double and you can see how easy he made it although the center fielder cut it off. Also, that plate discipline is really something to marvel at.

Someone on here mentioned something about Gonzo’s eyes being unable to pick up the spin on breaking balls. Could that be his issue?

That’s why Johnson was a top draft pick and it’s good to see him doing it in A ball at his age. Let’s hope he can keep it up and make it hard for the Pirates to keep him in the minors for 4-5 years to save service time or whatever other excuses they can find. It would be nice to have a 20-21 year old tearing it up in Pittsburgh with some of their other prospects like the Braves currently do in Atlanta.

Check out Vaughn Grissom’s 14-day trending stats, looks like he may have fooled you with a hot, two-week start. You guys extrapolate everything positive when it fits your narrative; HINT, this game is non-linear and outcomes are harmonically random.

Check out Acuna, Albies, Harris, Strider, Fried, Riley and even Grissom’s entire body of work in the majors so far. I’d gladly take any of that.

Why manufacture make-believe scenarios to get mad at?

Long way away, so there’s lots of obstacles before him. Let’s hope he has no problems with them.