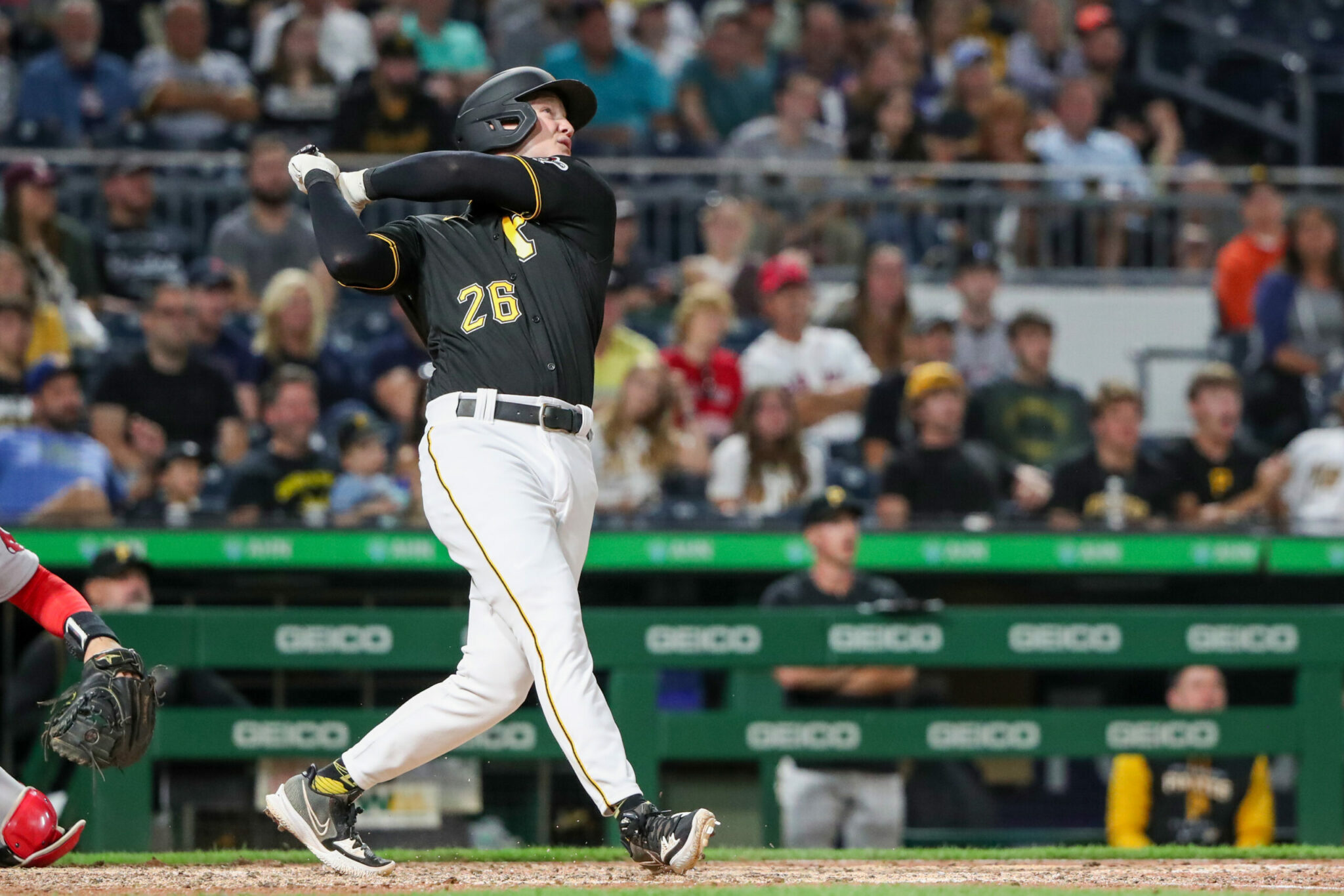 The Pittsburgh Pirates announced prior to Wednesday’s doubleheader against the New York Mets that infielder Josh VanMeter has been designated for assignment. The Pirates recalled infielder Hoy Park to take his roster spot. They also recalled pitcher Eric Stout as the 29th man for today’s doubleheader.

VanMeter was acquired via trade prior to the season. He played 67 games this season, hitting  .187/.266/.292 in 192 plate appearances, while seeing time at six different positions, including pitcher and catcher. He finished with a -1.1 WAR this season, which is the third worst among the 62 players used this year by the Pirates.

The entire VanMeter experience is so quintessentially Cherington circa 2022:

A nondescript guy DFA’d by a bad team (not Pirates-level bad, but still bad), that Cherington so wanted to claim that he actually offered a live body in trade.

Even though he had previously accumulated 7 other guys on the 40-man who could play multiple infield positions (Newman, Tucker, Park, Castro, Castillo, Marcano, Chavis). All but Castillo had previous major league experience.

By acquiring VanMeter, he created an unnecessary logjam.

That logjam forced Castillo and Tucker into RF for 16 and 11 games, respectively and Marcano into 30 games in LF.

That same logjam has kept the one guy at Indianapolis who has hit the entire season (Bae) from being called up.

Not DFA’d immediately after the trade deadline because reasons.

WAS DFA’d when another catcher – who can’t hit – was waived by Toronto.

I could go on – because the plan for the season was to roster one catcher, and the one catcher was a guy who had caught the majority of games for his team exactly once before, but the point is made – it summarizes the pointlessness of the whole season.

Was there ever a goal?

Christ sake is this an inaccurate assessment.

He started 31 games at 2b (that’s 19%), he wasn’t blocking anyone and sure as hell wasn’t responsible for Marcano playing 30 games in LF. Tucker was playing RF before VanMeter arrived and is objectively worse than JVM, so I’m not even sure of why you’re including him.

The list of guys you claim were blocked by JVM (sans Newman) have combined for -1.8 fWAR. Also, you claim he *blocked* Bae, yet when JVM was DFA’d, Bae remained in AAA and off the 40. What the hell are we even talking about

The point is I think VanMeter’s entire time in Pittsburgh, from how he was acquired to how he was deployed to how he was discarded, was pointless. He’s spaghetti BC acquired intentionally to throw against the wall, when he already had a box full of the dudes he accumulated/retained over the last 2 years. He sucked before, he sucked early and often, but he somehow stuck around through game 130. The fact that the other dudes also sucked or sucked worse is irrelevant, they weren’t trying to win – but they were trying to figure out who might be on the next competitive Pirate team. And to me, any time wasted rostering a dude who obviously won’t be is a wasted opportunity to find out. And to top it off, when he finally was cut, it was to bring in another strand of spaghetti, rather than give Bae a 25-game intro.

I’ll be the first to admit I’ve hated that acquisition since the jump because it made no sense to me then and still doesn’t. It feels nihilistic. Bugs the shit out of me.

Glad you are focusing on JVM. My issue with JVM goes back to how he was acquired……on March 31, less than a week before Opening Day. WTF was that? Even with the strike, BC had a month to round out the roster. The coaches evaluated and plenty of MIF’s got their reps in ST just fine and then WHAM out of nowhere we have a new starting 2Bman to come north. It just made little sense then…….and obviously in hindsight know it didn’t pan out well for the half-dozen or more players that were affected by having JVM. It will go down in the annals of Pirate history as to why JVM? and why he was kept so long?

Dude, it’s all good. I think it was just part of the evaluation process. Throughout his career, JVM has posted good bb rates and has some pop. Nothing wrong with seeing if he might be the next Max Muncy. What’s the worst thing that happened trying to find out? Diego Castillo lost a few ab’s.

I fully appreciate you’ve been conditioned to think like this through the complete and total failure of Cherington to successfully execute, but competent GM’s leading rebuilds have absolutely turned players like Van Meter into longer-term assets!

27 yo Grade 40 IF prospect Jorge Mateo was DFA’d by San Diego, picked up by Baltimore, and is now a 2.5 WAR starter in their breakout season.

Van Meter himself is only 27, a Grade 40 prospect, and was every bit the quality of the internal guys you’re bemoaning have gotten less opportunity.

You’re lacking imagination about what Van Meter could’ve been because you have no faith in Cherington making it happen.

True. And why would I have faith?

The list could be a lot longer if you raise the age to 28 (where you get guys like Nogowski) or include another 10-15 relievers who pitched a few games and moved on. I only include Fletcher because he was on the 40-man at the beginning of the season, not a mid-year waiver flyer.

But yeah, no Muncies or Mateos here.

Ah, the age-old question, or one that at least goes back to 2016,–is it a failure in evaluating talent or a failure in getting the most out of the talent?

Gotten so bad that we’ve completely forgotten that these are perfectly rational strategies for tanking clubs to take on.

The waiver/DFA wire is no less an avenue for talent than this board’s fetish of giving arbitrary at bats to every grade 40 prospect the org has.

Hey, I remember when Huntington made lemonade out of Vance Worley, Rich Rodriguez, Chris Stratton, AJ Schugel. Cherington’s moves just seem so much less shrewd, and they plain haven’t worked out.

Man are you overthinking this.

Nothing more than milquetoast tank and rebuild shit.

You’ve just wasted hours of your life you’ll never get back.

Also it only took me about 20 minutes to write it. It’s less the wasted time and more the space it takes up in my brain.

I can’t not be bothered by it, NMR.

I hear you my friend, I hear you.

I have no real issue with acquiring him, just how long they kept him.

The Pirates just made a couple of waiver claims (I thought Fernandez sounded like their type of claim when he was DFA’d). I guess that explains why JVM was DFA’d today.

I guess I should be more patient–I figured there would be an article up very soon, but saw the MLBTR blurb, didn’t see a PP article, and posted here 🙂

Specifically, via MLBTR (as to why I thought we might make a claim):

“While Fernández hasn’t had a ton of MLB success to this point, the 25-year-0ld could generate some interest on the waiver wire. He’s averaged a blistering 98.8 MPH on his heater during his big league time this season.”

Anything to have Van0fer gine! But why not Bae?!?!