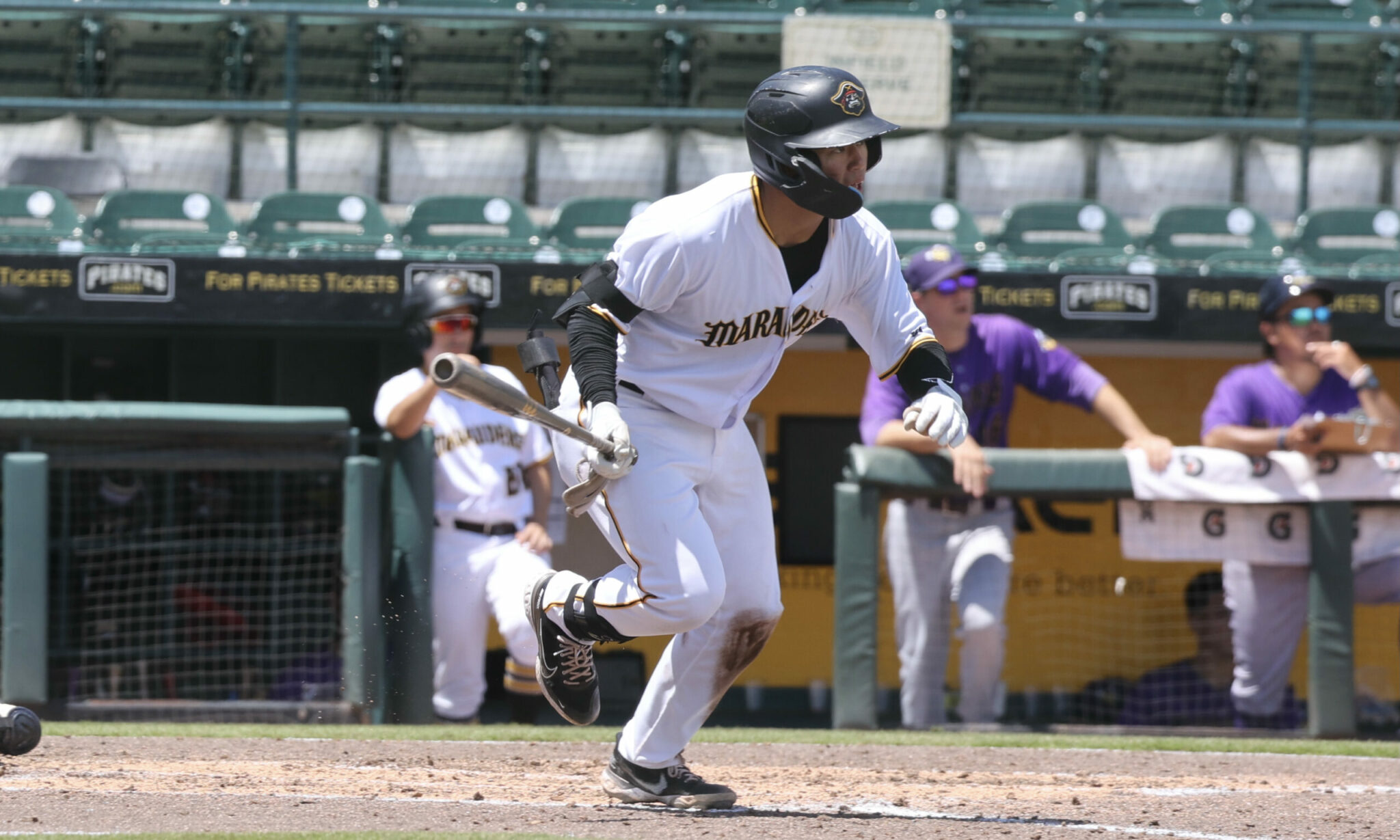 It wasn’t the most ideal start to Termarr Johnson’s professional career, the fact that he went from a sub-.200 average to a .313 mark with Bradenton in just one game should tell you how small a sample size we’ve been working worth.

The fourth overall pick picked up three hits on the day, including this double to left center field.

Great overall at bat by Termarr here. Shows a great eye holding off on two low pitches. Tries to jump out in front of a fastball away that he misses on. Two pitches later takes similar pitch in nearly same spot the other way for a double #LetsGoBucs pic.twitter.com/Hit1YXLCws

It was an interesting day for Johnson, as you could make the case that neither of his next two hits should have happened. His next hit more than likely should have been called an error, and the outfielder lost track of the baseball when he hit his second double. In his defense, the error came off the bat at 105-mph, an impressive feat.

He did flash a little bit of the glove as well, making a good back-handed start, starting a double play.

Termarr Johnson with a nice back handed stop to start a double play. Having himself a game #LetsGoBucs pic.twitter.com/zefEuqgHsD

It’s an interesting double play combination in Bradenton right now. Oneil Cruz stands a towering 6’7 ” playing shortstop at the major league level, with the middle infield for the Marauders are listed a foot shorter than that on their respective MiLB.com pages.

Regardless, they both came up big for their team Wednesday, with Cheng picking up a two-run double in the team’s win.

Tsung-Che Cheng with a two run double to give the Marauders the lead. Was thrown out trying to stretch the hit to a triple, but another hit and more runs driven in by the shortstop #LetsGoBucs pic.twitter.com/WNb1WMncd2

Mitchell’s time in Pittsburgh will more than likely keep him from passing his 2019 home run totals, but it’s a mark he would have easily passed if he had stayed in Indianapolis the entire season with the pace he’s on.

The outfielder picked his ninth home run of the season for Indianapolis, and is posting impressive numbers at the Triple-A level this season.

Bins is striking out 38% of the time in Indianapolis, and owns a .195 average in what has been mostly a disappointing season. He did launch his ninth home run of the Triple-A season on Wednesday, at least showing that he can put a drive into the ball when he makes contact.

Another two-run shot? We'll take it.

The Pirates 10th round pick in this most recent draft hit his first professional home run on Wednesday, reaching an even 100 mph when it comes to the exit velocity.

Tanner Tredaway with his first Bradenton home run, a two run shot that gives the Marauders the lead. An even 100 mph off the bat #LetsGoBucs pic.twitter.com/s7OdsieDQZ

The Pirates third round pick has been great for Bradenton so far, not only hitting, but has been a very solid defender at third base. He got to show off his arm on Wednesday, making a great play to get the first out of the ninth inning.

Thanks. Watching these clips reminds me of what talented athletes they are. I got to play against two guys who got drafted but stalled in AAA. It was a humbling experience. My rule is to be respectful. Even though the older I get, the better I was, the guys who get released after Bradenton would have dominated me and my teammates.

I was at the Indy game yesterday, and the highlight was watching Bae’s pair of line drives to left field — beautiful hitting.

Thank Heaven the big team is so stocked with top hitters that we don’t need Bae in the lineup!

Both Bae and Castro are extremely valuable in that they play multiple positions well, hit for average and some power, and their K/BB rates are around 2/1. Yes, we need these guys

Sorry, emjay, I forgot to hit the sarcasm font!