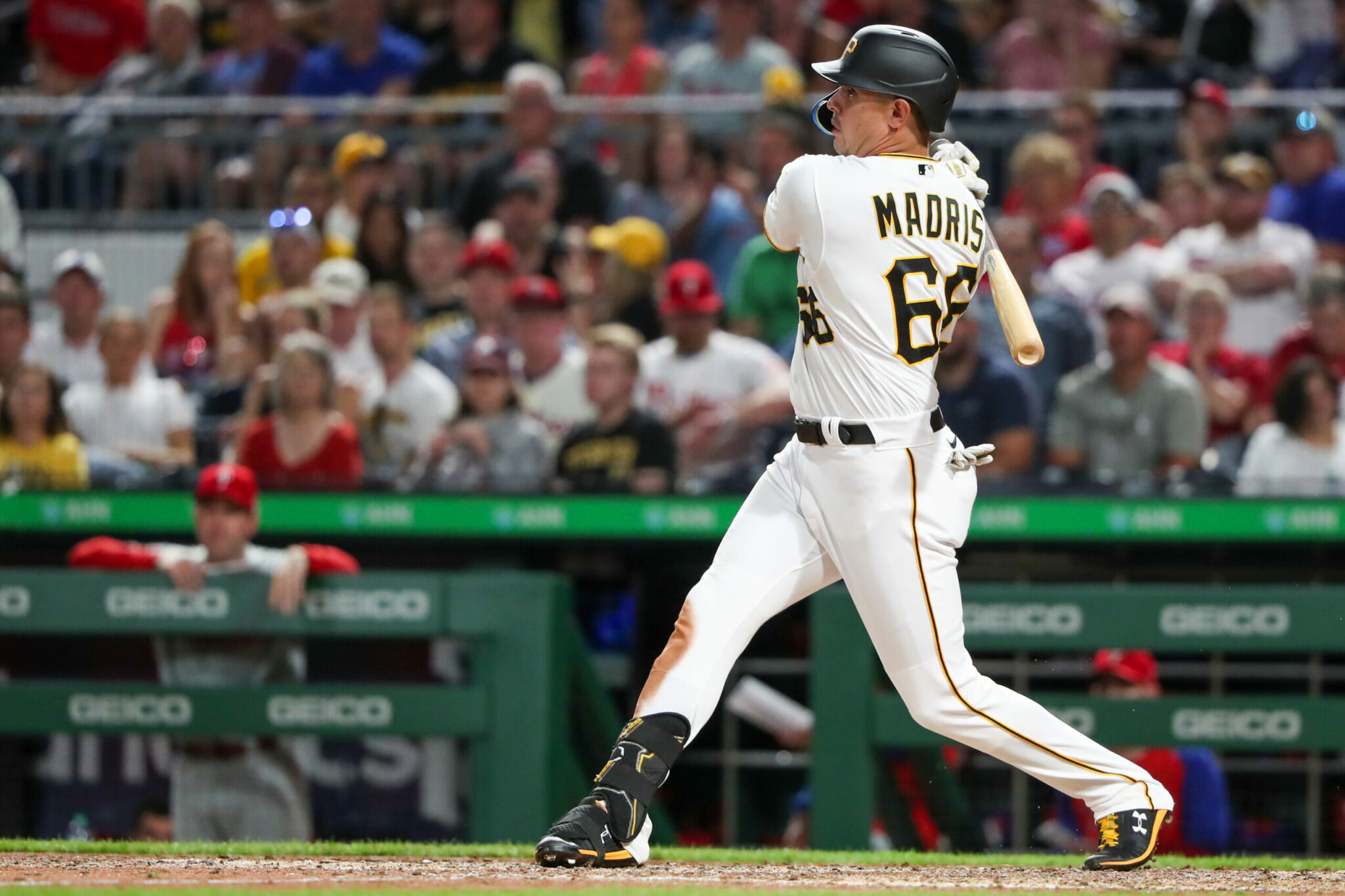 The Tampa Bay Rays announced on Friday afternoon that they have claimed outfielder Bligh Madris from the Pittsburgh Pirates. He was designated for assignment three days ago when the Pirates added Luis Ortiz to the 40-man roster.

Madris debuted in the majors this season after putting together a strong Spring Training, followed by some great hitting at Indianapolis to start the season. The 26-year-old had his share of struggles in his first opportunity in the majors, hitting .177/.244/.266 in 39 games. He returned to Indianapolis and did well, finishing with a .294/.366/.482 slash line in 71 games, which gave him the second best OPS on the team behind Cal Mitchell.

At least his winters will be tolerable than in Indy or the Burgh. Except hurricane season is around the corner. Good luck to him.

Hey BC.. thanks for throwing another game away by starting Wilson. Shocker he gave up another home run.

No articles on the Hayes embarrassment?? Totally unprofessional and along with the Castro phone debacle, supports the fact that this is an organization managed by incompetence and comfortable with failure. Hayes should sit a few games. Unbelievable

The Pirates didn’t lose Madris, they made a conscious decision to give him away. Madris was and isn’t a top prospect but what competent organization would expose him, over the likes of Allen, Wilson, Beede, etc? Only a laughing stock of an organization like the Pirates. I will not be surprised if Madris finds success in Tampa. He’s the winner in this.

his LH bat is good, but his position inflexibility is bad

the majors are populated with X-Pirates so I wish him the best and hope for his success.

you gotta be happy for this kid to get away from a joke of an organization.

He has to be thrilled

In two games against the Rays this season, Madris went 4-8 with two doubles. That may have stuck in the mind enough to say “why not?”.

It amazes me how fans at least on this sight still appear to believe Madris has major league potential. It has to be because of his first 10 games in June because in July and August he was positively horrible. Even considering June, his offensive stats for the year fall below VanMeter’s and just above Yoshi’s two guys fans couldn’t wait to get out of town.

If the Rays, the team that also claimed Yu Chang off Pirate waivers in July and BTW DFAd him last week, can find a way to turn Madris into any kind of major league player they deserve every accolade it’s possible to give and it might be time to start seriously considering that they could have some kind of magic potion bubbling up from the waters around Tampa.

What amazes me is the players we lose when we DFA a player so we can keep an endless amount of useless garbage waiver pickups that won’t be with the team in 3 weeks. This GM has proven time and again he has no clue what he is doing. There aren’t any hidden gems in the endless amount of waiver pickups. 3 years of this crap is proof enough.

The difference is Madris has only 113 AB’s. Van Meter has 743 ABs and Yoshi 557 ABs in the show. It’s too SSS to give up on him. I’m hoping he thrives and proves the Pirates wrong (once again).

BTW, Yu Chang now with the Red Sox on 28-man. He’s hitting .260 this season. I see Madris as having more upside than Yu………only time will tell.

Surface numbers LOOKED better this year in AAA but that appears to be a result of a high babip. All other things being equal, no real improvement worth noting.

Considerably better as a 26 year old repeating a level, especially if he is a LEGIT prospect

They’re gonna have him adjust his right ring finger a quarter inch on the bat and then play him against righties on day games in the eastern time zone or something and he’ll win them two games and then they’ll cut him when the luck runs out and do it all over again.

These guys get it, churn and burn is the only way to go.

The angle you’re missing is that, if you claim 5000 relievers off waivers and hang onto all of them for at least a couple years, eventually one of them will turn into Trevor Hoffman. Claim-the-lame works, but you have to give it at least 200 years. So, patience!

Flabbergasted by this floundering organization.

There’s the comment I came to read, thank you!

Good luck Bligh and at least you’re going to an organization that knows how to win!

Didn’t want to see that, but it’s good for Bligh at least. He’ll probably get much better coaching.

I talked to him after I heard the news. He didn’t want to leave the Pirates, but he recognized that Tampa is a good place to be for player development, so he’s looking forward to the opportunity. Basically, if he had to leave, he couldn’t have picked a better spot

Or a better Manager, Kevin Cash, who always – no matter how bad it is – finds a way to keep everyone fired up and moving in the right direction. I believe the Pirates have a Kevin Cash-type in Don Kelly, the Pirate Bench Coach. A local kid with strong ties to the community and a strong understanding of game.

After 3 years of sub-.400 winning percentages, one would think Shelton would already have been fired. No better way than to fire Shelton now and at least allow Kelly time to manage the last 17 games and also be able to consider the team of Coaches he wants around him going into the off-season.

Cash has nothing to do with success.

its the constant buy low sell high regardless how painful that gets them W’s. Cutch would’ve been traded after 2015. Reynolds and Bednar would’ve been gone after last season.

When he was DFA’d I thought someone might grab him off waivers if they had room on the 40 man. He is the type of player you might take a look at as an extra outfielder. He is in AAA. Has shown some potential with the bat in the past, and is ready to be given a chance to see if he can make it at the next level. Good for him. I hope he does get a chance to show whether he can make it in the Majors.