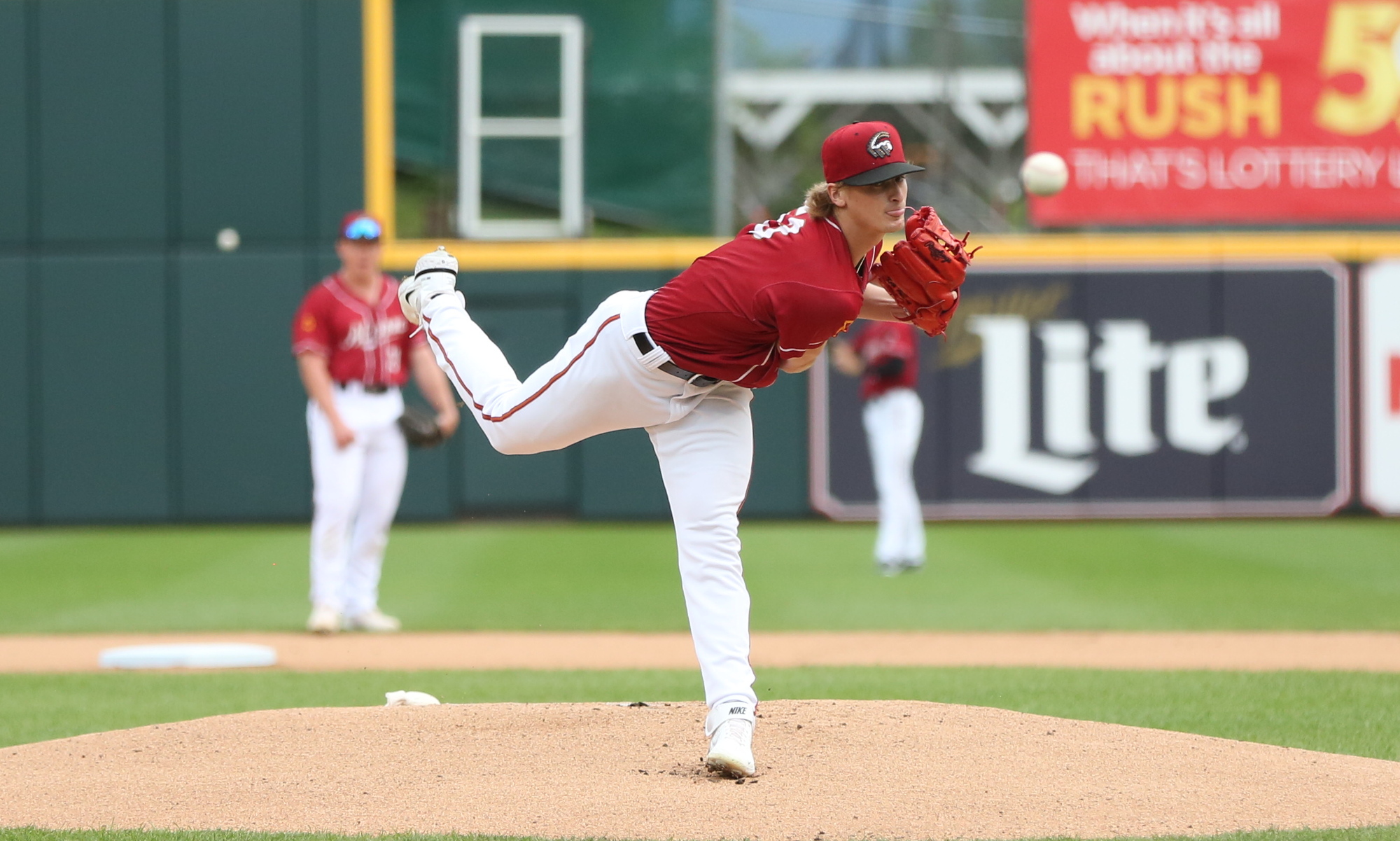 The Pittsburgh Pirates and Indianapolis Indians announced that six players from Altoona have been promoted to Indianapolis for the final eight games of the season. Pitchers Quinn Priester and Colin Selby, infielders Malcom Nunez and Aaron Shackelford, catcher Endy Rodriguez and outfielder Matt Gorski will all get in some extra time before their season ends. Priester, Selby and Gorski will continue on to the Arizona Fall League, which starts on October 3rd, while Rodriguez is slated to play winter ball in the Dominican.

Priester had a 2.87 ERA in 15 starts this season with Altoona, posting a 1.20 WHIP and 79 strikeouts in 81 innings. He missed the start of the season due to an oblique injury.

Shackelford showed some nice improvements this year after last year in Greensboro, going from a .728 OPS in a hitter-friendly park, to an .813 mark this season in 113 games. He had 23 doubles and 26 homers, while seeing a small bump in his walk rate and a small decline in his strikeout rate.

Selby missed some time this year, so the trip to Indianapolis before the AFL will allow him to get in a decent amount of work before his off-season begins. He had a 2.20 ERA and 41 strikeouts in 32.2 innings this year.

Indianapolis made room on the active roster by transferring Kevin Padlo, Josh VanMeter and Taylor Davis to the Development List.

Shack is an interesting guy to me. He seems to be getting better and very under the radar. Thrilled to see Endy move up. Here’s hoping he starts there next year and doesn’t get bumped down to Altoona to get more reps. If any prospect has shown he deserves an aggressive push it’s him. Same goes for Gorski. Guess the extra couple games in Indy and the fall league is a good thing. Also hope he doesn’t see the same bump down.

Also, since when is Altoona a hitter-friendly park? I thought it skewed towards the pitchers.

Haha, to make room on the active roster, Indy put VanMeter, TDavis and Padlo on the developmental list.

Not everyone has been activated. Priester hasn’t, for one, probably because he isn’t starting today. Most likely there’ll be daily roster-juggling.

EDIT: everyone but Priester is on the active roster,

Shackelford is a pretty amazing story just to make it this far–played at an NAIA school, signed for just $10k, played 53 games at Bristol in 2019, lost the 2020 season, and then had to make the jump to high A in 2021 yet here he is just a step away from the majors.

Looking over his BR page, I also noticed that he has a strong reverse split–he crushed lefties this year (.949 OPS) and also was better against lefties than righties in ’21.

Everyone loves an underdog story. For as many misses this organization has had on top prospects, they’re due a good Shack Attack story!

Do they need to make room on the roster for these players?

I think they can just transfer guys to the development list.

Yeah a roster with Drew Maggi, Josh VanMeter. Kevin Padlo, Taylor Davis and Jose Godoy and they would consider dumping Mason Martin and keeping anyone of them. That sounds like something they would do if they don’t have roster expansion available this time of the year.

All should be gone by next spring. Point is: Martin is getting passed by and keeps regressing (K%).

I got the point about Martin’s future I’m just saying for these last 8 games he shouldn’t be jettisoned instead of any of the guys I mentioned.

Guessing all of the names that you mentioned will not be returning to Indy next season. None of them are on the 40man and none will be added after the season.

Shackleford had a darn near identical line in Altoona this year as Martin did there last year. Martin played the first half of the season as a 21 year old last year (June 2nd bday). Shackleford turns 26 in October.

Nunez is the 1B prospect at this point. Difference between Martin & Shack is simple: K rate. One is going down and the other keeps climbing…

I’m not nearly as high on Nunez as a lot of people, as least until I can dive into numbers a little more. There’s also the aside that scouts have mentioned he may not even be able to remain at 1B.

I think it’s far from being a sign Mason is toast. Just as Mason had to do this year, and largely struggled, Nunez will need to show progress next season. Really at this point, I’d think there’s a better chance of Gorski taking away 1B ABs. Maybe even Tank for that matter, depending what they decide to do with the catchers.

I agree that right now Nunez is looking like the best prospect. I hope he turns into an all-star, but I wouldn’t give up on Martin yet. Yes, he strikes out too much but he also gets some good results when he makes contact and that should not be forgotten just because the strike out numbers are bad. Seventeen HR and 72 RBI so far in what has to be considered a down year isn’t bad.

Shackelford’s a wild card, but he’s pretty old for the level to take his AA numbers too seriously. Let’s hope at least one of them blossoms into an actual major league first baseman, for the Pirates that is and not someone else.

You cant strike out nearly 40% of the time in the minors and make it. Nunez looks much better with a 24% K rate a AA and 22% for his career. Decent power and walk numbers as well.

The age is a big consideration but with Martin it always comes back to plate discipline. Martin had a 161:38 K:BB ratio last year while Shackelford had a 128:40 K:BB ratio; Martin K’d in 34% of his PAs, Shackelford in 29%. Does the age difference make up for what seems like a pretty significant difference in K rates? Maybe.

Also, a better age comparison is Martin was in his age 22 season, Shackelford in his age 25 season (as opposed to the 5 year gap your numbers might imply).

It is, but I I was just going by the way professional baseball categorizes their ages instead of arbitrarily subtracting a year for Martin because he started the season at a certain age and adding a year for Shackelford because he had a birthday a couple of months after the season. Of course when you have two players who have taken such different developmental paths, we shouldn’t only look at age anyway. Also relevant is that Martin has been in professional baseball since 2017 and Shackelford only since 2019 and while college players are expected to advance faster, Shackelford surely had a big adjustment after facing NAIA competition.

Nunez would be the main reason why Martin may be gone after this season. Shackleford is more insurance and Nunez is the new 1b prospect. Martin has 183 SO this,season, his highest total yet in the minors. He turned 23 June 2nd this year.

Next year will be a make-or-break year for Martin. Surely they’ll have him repeat AAA and he’ll need to show that given time, he can adjust to a level to get his K rate manageable. He’s plenty young enough to do that and maybe he can find something that works this offseason and put it into practice next season.

I wouldn’t mind, though, seeing him get selected in the Rule 5 Draft–being in an organization that is breaking records for K’s is probably not the best place for him

THIS year was Martin’s “make or break” year, unfortunately.

I honestly could see it either way. I would guess that he is not protected on the 40 man but would not expect him to taken in the draft because of all of the strikeouts. It will come down to rostering and if they think that they could get him playing time to start the season. It would not surprise me that they give him a make or break season but also would not be surprised if the leash is very short and if the strikeouts continue, he could be gone in the first half of the season. Bummer to be honest with the power he posesses.

0.0% chance he is taken in Rule 5 draft. But there’s definitely a chance he’s released before next Spring.

I was almost positive Priester would get promoted.

Would be nice to see all 6 make their Bucco debut at some point next year if they aren’t being blocked by a bunch of waiver wire pickups.

None of them are blocked by a sole.

Looks good to me. Very interesting to see Selby in there, although it’s not a shock to the real fans, i.e., P2 readers.

Selby hadn’t really been on my radar (i.e., he was just organizational depth) until seeing him in late July strike out 4 Bowie batters in 1.2 innings after watching Priester get a lot of weak contact but not many K’s. I was sitting just behind the dugout, and judging by some of his teammates reactions including Priester’s, they were pretty impressed with his stuff that night.

If you can get close enough, it’s really interesting to hear teammates’ reaction to a pitchers’ stuff. Pirate City used to be great for that.

True! I forget his name but they converted a position player to a pircher years ago and he was throwing 100 plus. Any time he threw a bullpen his teammates would gather around and you would hear lots of oohs and aahs. I don’t think he lasted long – zero control lol.

A bit, yeah. They may figure he needs a rest.

There’s a possibility there. When he’s healthy, he’s lights out. I can’t remember if he’s touched 100, but I know he’s upper 90’s

I was just about to start a Selby chant.