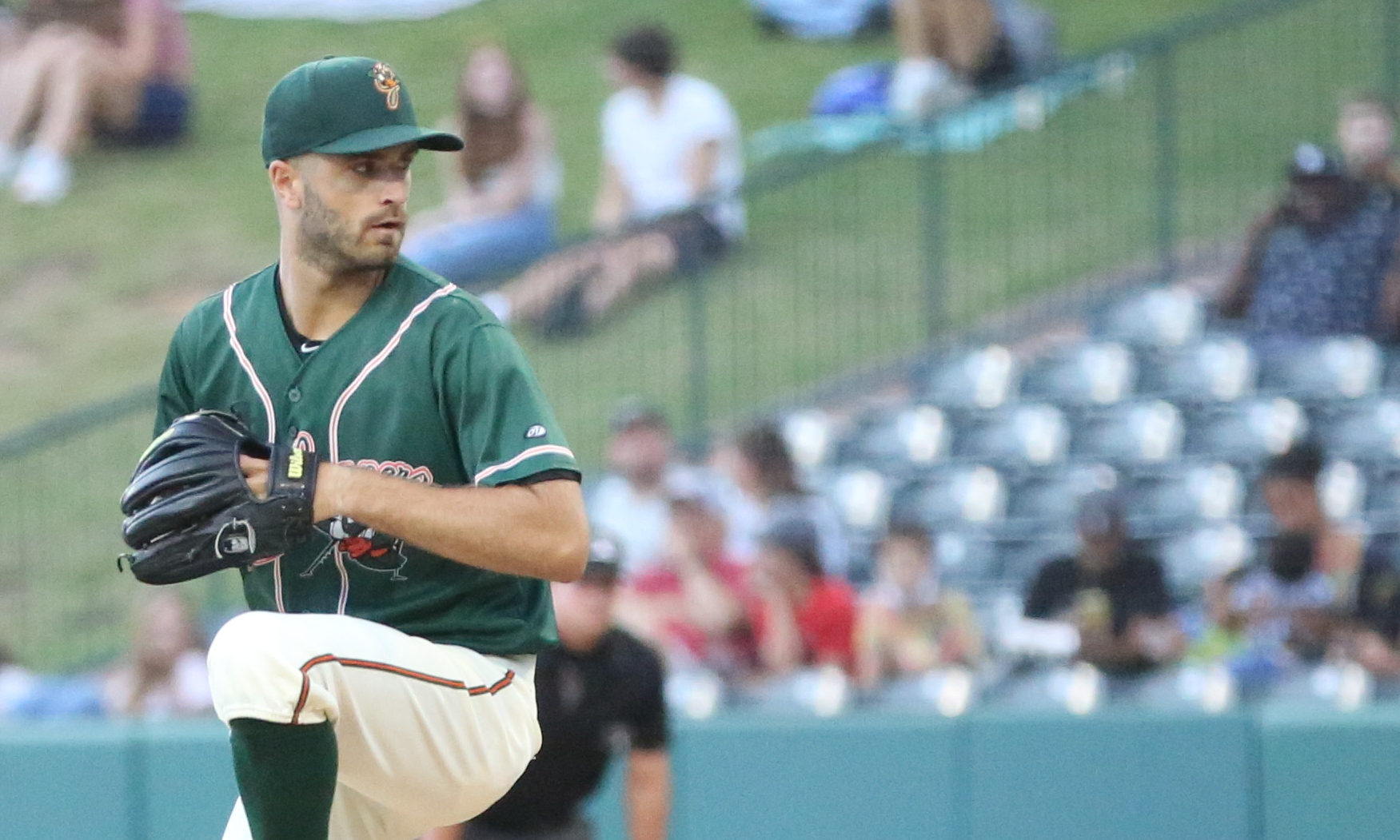 Meis has pitched okay for Greensboro this year. He had just one shutout appearance in 13 starts before this past week, so you could say this came out of nowhere. He started the week with a 5.30 ERA in 54.1 innings, with batters putting up a .784 OPS against him. He had a nice run with Bradenton earlier in the year, but he wasn’t exactly dominating before he was promoted to Greensboro, giving up 13 runs in his last 22 innings with the Marauders. You could guess that he was playing a poor team this past week, but it’s a team that had previously limited him to four innings over two starts (one in June, one in July) in which 13 batters reached base. Winston-Salem is one of the lesser teams on offense this year, but they are far from the worst in the league. One other thing to factor in here, these two starts by Meis happened in Greensboro, which is a very hitter-friendly park.

Meis was a tenth round draft pick of the Pirates last year. He was a starter in college, but the Pirates used him in relief last year with Bradenton after signing. He got into ten games and had a 2.04 ERA and 27 strikeouts in 17.2 innings. He has moved back to the starting role this year with mixed results. He’s been working with a three-pitch mix that Anthony Murphy broke down here in June from the end of his time in Bradenton. His fastball gets up to 95 MPH, and his slider gets solid results, while his changeup has improved since the start of the season.

Meis will likely move up to Altoona in the starting role next year. With Altoona’s season going a week longer than Greensboro this year, we might even see him get a Double-A start before the season is over. You can’t get overexcited about two starts, no matter how well he pitched. You can definitely take some positives from the outings. The fact that he’s pitching great at the end of the season when some guys seem to be wearing down. Also that he did it in Greensboro, where ERAs go to die. The 22-year-old Meis has turned some heads this week, as he finishes up his first full season of pro ball strong.

Analysis:  Travis Swaggerty only played four games this past week, but he contributed in all four contests. His 1.446 OPS was the best in the system for the week. He had seven hits, including a double, triple, homer and four walks. He had a .683 OPS in August, which was the third straight month his OPS went down from a high of .895 in May, so he could really use a strong month of September to finish on a high note. Hoy Park had himself quite a weekend from Friday night into Sunday. Three big games led to a 1.030 OPS in 30 plate appearances for the week. He has a .727 OPS in 78 games for Indianapolis this season. Drew Maggi had a 1.000 OPS in 13 plate appearances. Diego Castillo put up a .316/.435/.526 slash line in 23 PAs. He has a .745 OPS in 28 games since being sent down by the Pirates. Blake Sabol hit .313/.450/.500 in his first week with Indianapolis since being promoted from Altoona. Ji-hwan Bae just missed with his .784 OPS in 24 PAs.

On the pitching side, Osvaldo Bido had an outstanding start, throwing six shutout innings on one hit, one walk and seven strikeouts. His previous longest shutout performance this season was four innings.  John O’Reilly has been pitching great over the last five weeks, including one run over four innings this past week. He has a 1.23 ERA and batters have a .389 OPS against him since August 1st. In two relief appearances, Cody Bolton allowed one run over 3.2 innings, while striking out five batters. He had a 3.00 ERA and 18 strikeouts in 15 innings last month.

Analysis: Nick Gonzales had the second best OPS in the system for the week, though he batted nine more times than the leader (Swaggerty). Gonzales had 11 hits, including five doubles and a homer. He has a 1.005 OPS in 18 games since returning to Altoona, which now has him up to an .823 OPS in 61 games for the Curve. Endy Rodriguez wasn’t as good as last week when he earned the Player of the Week award (plus the Player of the Month), but he still had a big week, hitting .250/.429/.750 in 28 PAs. Aaron Shackelford went 6-for-20 with a double and a homer, finishing with an .833 OPS in 21 PAs. He has an .844 OPS in 101 games this season, and he ranks second in the Eastern League with 25 homers.

On the pitching side, Aaron Shortridge had an odd looking outing to get here, giving up four runs on seven hits in five innings, but all four of the runs were unearned (I use a 3.00 ERA as the cutoff if you haven’t noticed, though I’ve stretched it on occasion if some still stands out). Enmanuel Mejia had a dominant week in his two relief appearances, throwing four no-hit innings on one walk and seven strikeouts. Quinn Priester was strong like usual, allowing one run over six innings, with three hits, a walk and four strikeouts. He has a 2.37 ERA, a 1.18 WHIP and 65 strikeouts in 64.2 innings with Altoona. In two relief appearances, Nick Dombkowski gave up one run over six innings. He allowed five hits, with no walks and one strikeout. Carmen Mlodzinski made two starts, one allowing three runs in six innings, the other had him tossing four shutout frames. He had one walk and ten strikeouts in his ten innings.

Analysis: Termarr Johnson and Sergio Campana split the votes for Bradenton’s Player of the Week. Campana led the way with his 1.206 OPS in 20 PAs, highlighted by two doubles, a homer and three walks. While he has a .656 OPS for the year and a high strikeout rate, there are some highlights. He has 28 steals, 50 walks and he has played outstanding defense in center field. Johnson was off to a slow start to his pro career until he had five hits and three walks between the Wednesday/Thursday games. He had a 1.088 OPS in 22 PAs last week, and he’s up to a .722 OPS in ten games with Bradenton. Wyatt Hendrie has been catching regularly recently, and he hit .313 with an .889 OPS in 19 PAs last week. He has a .700 OPS in 78 games for the year. Tanner Tredaway had an .873 OPS in 17 PAs last week, which included his first career homer. Brenden Dixon led the just missed group with a .792 OPS in 14 PAs.

On the pitching side, Yunior Thibo tossed 4.2 shutout innings over two relief performances. Drew Irvine allowed one unearned run in 4.2 innings. Anthony Solometo continued to pitch well, giving up one run in 4.1 innings, with two hits, three walks and five strikeouts. He has a 2.95 ERA and 1.08 WHIP in 42.2 innings, with 46 strikeouts.

Well deserved. Also nice to see Nick the stick get it for Altoona.

It’s very rare for a 10th-rounder to make the majors and have positive value, but as I was skimming over 10th round picks over the last decade on BR, I learned that the Jays’ closer, Romano, was a 10th-round pick in 2014 and signed for only $25k. Since spending caps were implemented in 2012, Romano has the most bWAR (5.3) of any 10th-rounder.

That’s pretty rough for an entire round over that time period, though obviously newer ones need more time. The tenth round includes a lot of players who would have been much later round picks because teams are usually trying to get within their budget and save money at that point. A tenth round pick isn’t quite tenth round talent anymore. On average I’d say it’s much closer to 20th round talent

Yeah, that’s what I was thinking too which made Meis’s success jump out even more to me. Though I guess because of the short 2020 draft there was more talent available in 2021, and I just noticed that we had signed Meis for $127,500. The bonus figure is pretty surprising given that I would have expected an under-slot pick at that point to save money for the high-upside HS picks we had made earlier.

Just to add to this, it’s interesting to wonder about the conversations they had–should they wait to pick Meis in the 11th round where nearly all of his bonus wouldn’t count against the pool? They must have felt that he wouldn’t be available then which leads to a follow up question of did they expect him to last until the 10th or just felt like they caught a break? In any case, he’s now one of two players from that class to have earned a player-of-the-week award, right?

Just when you’re ready to give up on baseball until next Spring, you read this article and realize maybe things aren’t as bad as they seem.

I grew up Italian and Catholic – this is where you light candles and say a Novena for special intentions, such as a change in leadership of the Pirates!

Meis was a no brainer. What a week.