The Pittsburgh Pirates signed nine players in the Dominican Republic today. They were part of the original announcement of 22 players sent out by the team on Sunday. You can find the full list in our tracker, which will be updated throughout the entire 11-month signing period.

Here’s a look at the players who signed today, along with bonus information where available. Scouting reports for these players will be updated here tomorrow. 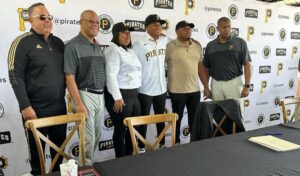 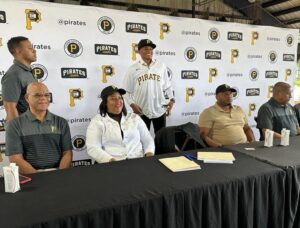 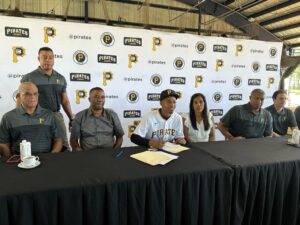 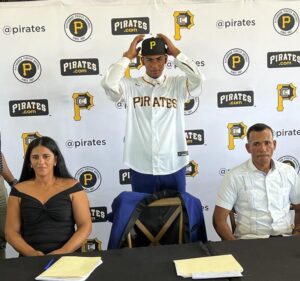 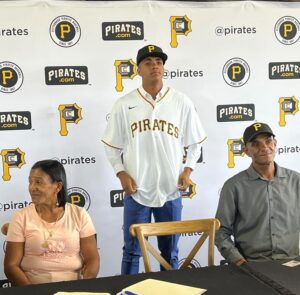 Angel Aquino, I included two photos here, just so you can get a better look at him and then from the side to see how big he is. Corner outfielder with power/speed/arm, listed at 6’5″, 205. 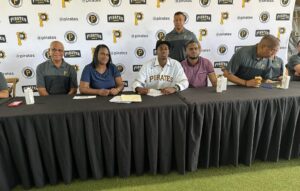 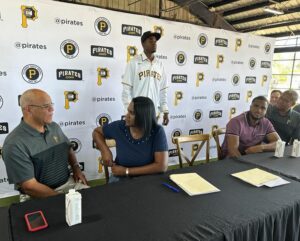 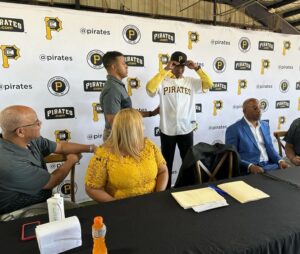 I added a second photo of him because every player showed the back of their jersey and they are wearing the #22. It’s not a McCutchen tribute. They are technically the signing class of 2022, or players who were first eligible on July 2, 2022 – August 31, 2022. 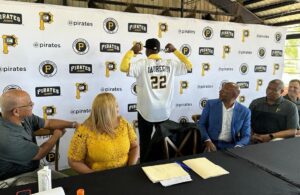 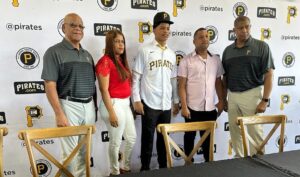 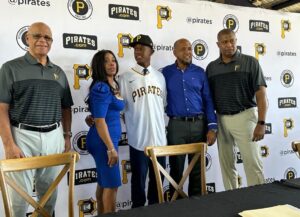 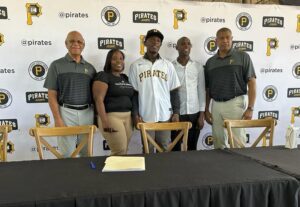 Bonus Information for Five of the Pirates...

Who are the two gentlemen from the Pirates in most pictures? I assume one is Viscaino. I also see that our two highly ranked signings received the same or less money than three others. Were there ranked signings bargains or did we overpay for the other three? In the grand scheme of things not a biggy, but just curious.

This I believe, will be our second Bladimir, hopefully we can get one to the big leagues … I just love the name.

A proud day for all, culmination of a lot of hard work. Hope our development team is up to the task!

When will scouting reports come out for the rest of the signing class.

Do we know how much money is left in the tank? I’m seeing $2.41m of what, $5m and some change? The pitcher I’m guessing will get a big chunk of the rest.

My guess is that they are almost out, but they can trade for bonus pool space again, so that’s not a big deal. I relayed this yesterday before finding out how much Jauregui received, but they didn’t have enough for his original asking price and he had to come down to their offer. I also reported the Shim bonus yesterday, it’s in the chart above. There are 16 unknown bonuses (I do know some from Venezuela, but won’t be releasing them) and $1,815,500 left. Out of that group, there has to be a few guys who got six figures, so the remaining money is low.

The quality of the signing class is very good, and we may want to add some leftovers who will not amount to much in a bonus sort of way, but will help to continue to field 2 teams in the DSL. Never know when that light goes on between the ears!

Of course, not all or any of these kids is guaranteed MLB success. As a Pirate fan, I want another Roberto Clemente, though that’s dreaming. At minimum, I hope the bonus changes the lives of these kids and their families for the better. Anything more will be a bonus.

They look great in their new hats and jerseys