The Pittsburgh Pirates signed right-handed pitcher David Matoma from Uganda on Sunday, during the opening day of the 2023 international signing period.

MLB holds camps in Africa and Europe and the best players from certain areas will attend those events. The entire continent of Africa will have about 20 kids at these events, with South Africa being their version of a baseball hotbed, though it’s far from the most popular sport in their country. Then there’s the country of Uganda, which didn’t have a single pro baseball player at any point until just under a year ago.

Matoma is not a raw player though. He’s very athletic, standing in at 6’0″, 155 pounds now at 16 years old, with obvious room to add to that frame. His selling point right now is a fastball that gets up to 92-93 MPH with control. He’s a bit of a project, but not the biggest one on this list of players who are signing today. He’s not a novelty signing due to being from a rare baseball country. He has legit upside and current pitching abilities. He has a slider that’s 80-84 MPH with spin, and a changeup that is 78-83. His fastball is 88-92, touching 93.

In a quote I received via the Pirates from signing scout Tom Gillespie, he said:

“Davis is a tough kid, and incredibly driven-both as a competitor and to create opportunities for others. He’s athletic, with a quick arm and feel for spin. Highly mature and ready for his next challenge.”

“He has life on his fastball with more to come. I believe in this young man, his resilience, and his openness to learn. Early on the game may get fast for him at times, but I have faith in him and in our development staff. We’re well equipped to help him excel on and off the field.”

From Max Kwan, who is the Pirates Director of Player Personnel:

“David is a very good, well coordinated athlete with arm speed and a lot of promising traits, some of which has already started to come. What is even more impressive about David is his work ethic, willingness and motivation to learn and grow. It will be a fun development path to follow with this caliber of person and our development staff.”

If you missed it from earlier, seven players from Venezuela officially signed. 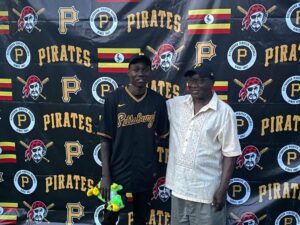 Photos of the Newest Pirates Players from...

Bonus Information for Five of the Pirates...

Also amazing that someone only weighing 155lbs can throw 93

He will be one of my favorite prospects to follow

Good for this kid, hope he makes it!

I’m wondering if they start him right off in pirate city. It seems like the Dominican would be the place for his skill level but be harder from a personal standpoint.

Had the same thought. Partly selfish, as I’d like to see him this summer.

I was in Uganda in 2017, I saw some ATHELETES there, but soccer was king. (Never saw even young boys plating stickball) will be interesting to follow this kid.

Did he get a pirate parrot as a signing bonus?

I’ve never asked, but I have seen that before in international signing photos. I’d say within the last 3-4 years it happens more often. So maybe everyone does, but only some want it in the photo.

well yes this is a fun signing!

And after our experience with Gift Ngoepe, we can seriously root for him to make it.
I said this the other day, the Dave Littlefield days of PR stunts are gone. The vast majority of these signees won’t make it, of course, but the more prominent signees we’re seeing now at least resemble what they’re advertised to be.